Toby and Oliver
Martin Jarvis, OBE is an English actor and voice actor. After a varied career in film and television, he has become particularly noted for his voice acting for radio and audiobooks. He is known for voicing Nergal on the Cartoon Network animated series The Grim Adventures of Billy & Mandy and as William in the The Life and Times of Juniper Lee. He is also known for playing Sir Duff Gordon in Titanic. A few of his other famous projects include: The Girl with the Dragon Tattoo and Batman: Arkham City.

For Disney, he voiced Satine in the 2012 Disney animated feature film, Wreck it Ralph, and Finn McMissile (replacing Michael Caine) in Disney INFINITY and Kinect Rush: A Disney/Pixar Adventure. 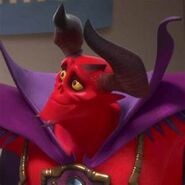 Satine
(Wreck-It Ralph)
Add a photo to this gallery

Martin Jarvis with his wife, Rosalind Ayres and their daughters at a Brit Week event in Hancock Park, Los Angeles, California on April 24, 2012.
Add a photo to this gallery
Retrieved from "https://disney.fandom.com/wiki/Martin_Jarvis?oldid=4175672"
Community content is available under CC-BY-SA unless otherwise noted.