Catherine (with Brennan)
Dominica (with Cameron)
Francesca (with Morris)
Martin Charles Scorsese is an American film director, producer, actor, and comedian. He is known for directing films, such as Goodfellas, Casino, Hugo, and The Irishman.

The Disney films he directed and produced were the more mature ones, like The Color of Money, Kundun, The Grifters, New York Stories, Bringing Out the Dead, The Aviator, and Gangs of New York. Additionally, he played Martin Rittenhome in Quiz Show. 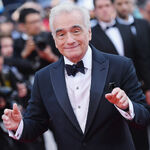 Martin Scorsese speaks onstage at the 23rd annual Hollywood Film Awards in November 2019.
Add a photo to this gallery
Retrieved from "https://disney.fandom.com/wiki/Martin_Scorsese?oldid=4318580"
Community content is available under CC-BY-SA unless otherwise noted.