Disney Wiki
Register
Don't have an account?
Sign In
Advertisement
in: Video games, Article stubs, The Avengers Project,
and 18 more

Action-adventure
Marvel's Avengers is a video game based on the characters of the Avengers franchise, developed by Eidos Montréal and Crystal Dynamics (developers of the Deus Ex and Tomb Raider series) and published by Square Enix.

Marvel's Avengers begins at A-Day, where Captain America (Jeff Schine), Iron Man (Nolan North), Hulk (Troy Baker), Black Widow (Laura Bailey), and Thor (Travis Willingham) are unveiling a hi-tech Avengers Headquarters in San Francisco — including the reveal of their own helicarrier powered by an experimental energy source. The celebration turns deadly when a catastrophic accident results in the massive devastation of the city and kills Captain America. Blamed for the tragedy, the Avengers disband. The game begins five years later, with all superheroes outlawed and the world in peril by an new organization called AIM, who replaced the heroes with robotics.[1] 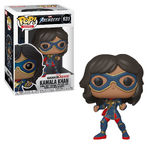