Marvel: Avengers Alliance was a turn-based social network game developed by Playdom in 2012. It is based on characters and storylines published by Marvel Comics, and written by Alex Irvine. The game was available as an Adobe Flash application via the social-networking website Facebook, and via Playdom's official website. It officially launched in Facebook at March 1, 2012, and was initially released as promotion for the 2012 Marvel Studios crossover film The Avengers. The game shut down on September 30, 2016.

Players take control of an agent of S.H.I.E.L.D. and can fully customize the agent by gaining experience, leveling up, and equipping their agents with various weapons and uniforms obtained within the game. They can also team up with up to two out of the current 35 available Marvel heroes in the game, each with their unique skills and abilities. Players start with only a few heroes, and the other heroes are locked. These heroes are needed to be recruited first by buying them with "Command Points", a currency in the game. Gameplay consists of turn-based fights that pit your agent and heroes against one or more waves of three or less enemies, with each character having unique attacks. There are five character classes, each with a specific strength and a specific weakness to one of the other classes; in the order in which they weaken the following one, the classes are:

There is also a sixth neutral class called Generalist which is the player's default class and is neither strong nor weak against any of the other ones. Aside from the player, Mockingbird and Rogue, a few weaker henchmen and some bosses can have Generalist as their class. Players can unlock various Marvel characters as allies and these characters can be customized to adjust their strengths and weaknesses.

A galaxy-wide disaster known as "the Pulse" has exposed Manhattan to attack from Marvel's most formidable villains. As an agent of S.H.I.E.L.D. (the secret espionage and peace-keeping organization of the Marvel Universe), the player must assemble and lead a team of superheroes. The mission: keep New York City safe from the clutches of evil. 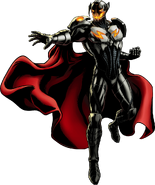 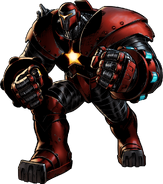