Marvel Disk Wars: The Avengers is an anime television series by Marvel Entertainment and the Walt Disney Company.

The producers are Nerima-ku and Toei Animation. Bandai is responsible for character merchandising. The three companies collaborated to create a fully localized Japanese series while also providing a line of merchandise targeted towards young boys aged six to twelve.

The project is an effort by Walt Disney Japan to deliver content tailored to meet the needs of local consumers. The series will be the first to target boys and intended to delight Japanese viewers.

It aired in Japan on April 2, 2014. There has been no announcement as to when it would premiere in the United States,[1] although an English Dub was released on Disney XD in Southeast Asia.

The story focuses on the Avengers comprised of Captain America, Iron Man, the Hulk, Thor, and Wasp. After being trapped in DISKS, biocode devices that trap and release super-powered beings for a short period of time, they will join forces with Spider-Man and a group of teens. The heroes will harness their respective fighting skills and superhuman powers to foil Loki's plans to conquer the world. 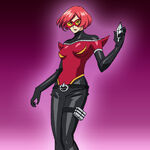