Since 2008, the studio has released twenty-four independently produced films with shared timeline, cast, and characters, making up the Marvel Cinematic Universe.

In 2009, Marvel attempted to hire a team of writers to help come up with creative ways to launch its lesser-known properties, such as Black Panther, Cable, Iron Fist, Nighthawk, and Vision.

On December 31, 2009, The Walt Disney Company purchased Marvel Entertainment for $4 billion, both Marvel and Disney stated that the merger would not affect any pre-existing deals with other film studios for the time being, although Disney said they will consider distributing future Marvel projects with their own studios once the current deals expire.

On October 18, 2010, Disney bought the distribution rights for The Avengers and Iron Man 3 from Paramount Pictures. However, as part of the deal, Paramount's logo would still be used in the promotion marketing and trailers for both films.

In June 2010, Marvel Studios set up a television division, headed up by Jeph Loeb as Executive Vice President, under which Marvel Animation will be operated.

As part of the deal transferring the distribution rights of The Avengers and Iron Man 3 from Paramount Pictures to Disney, Paramount's logo appears in the films' promotional materials and merchandise. Nevertheless, Walt Disney Studios Motion Pictures is credited at the end of these films.

Upon the release of The Amazing Spider-Man, Disney and Sony negotiated a two-way agreement. Disney would receive full merchandising ancillary rights to future Spider-Man films in exchange for Sony purchasing out Marvel's film participation rights.

By April 2013, Marvel Studios moved its production facilities from Manhattan Beach to Glendale, California, a location already populated by other Disney divisions.

On July 2, 2013, Disney purchased the distribution rights to Iron Man, Iron Man 2, Thor, and Captain America: The First Avenger from Paramount. The rights were assigned to The Walt Disney Studios.

At the time of The Walt Disney Company's acquisition of Marvel Entertainment, the film production rights to certain Marvel characters were licensed out to Constantin Film, New Line Cinema, New Regency Productions, 20th Century Fox, Columbia Pictures, Universal Pictures, and Lionsgate. Blade was the first character whose film rights returned to Marvel since the acquisition.

In August 2012, it was reported that 20th Century Fox was willing to allow the film rights to the superhero Daredevil and his related characters revert to Marvel and Disney, a contracted stipulation that required Fox to begin production on a new Daredevil film by late 2012. Fox had approached Marvel about extending the deadline and becoming a co-financier for the film, but was rebuffed. On October 10, 2012, the Daredevil film rights reverted to Marvel Studios, which was confirmed by studio president Kevin Feige on April 23, 2013.

On May 2, 2013, Feige confirmed in an interview that the Ghost Rider and Punisher rights had reverted to Marvel from Sony and Lions Gate respectively, as well as reaffirming the acquisition of the Blade rights. It was later revealed in May 2013 that Marvel has also reacquired the Power Man rights from Columbia Pictures. In an interview with Collider in early May 2013, Kevin Feige stated he believed the Elektra rights were back at Marvel through the Daredevil deal.

On February 2015, Marvel Studios and Sony Pictures signed a deal that would allow Spider-Man to join the Marvel Cinematic Universe, and would first appear in a Marvel movie before getting a solo movie on July 7, 2017. On June 2016, it was announced that the rights to Namor reverted to Marvel Studios from Universal Studios. On December 14, 2017, Disney purchased the movie and television divisions of 20th Century Fox, including the rights to the X-Men, the Fantastic Four, and Deadpool. The full rights reverted back to Marvel Studios on March 20, 2019.

Kevin Feige stated that since Marvel was now their own entity within The Walt Disney Company, it "felt like the time to update it and have something that is more substantial as a standalone logo in front of our features" instead of having it be accompanied by Marvel's studio or distribution partners' logos. Feige added that "“We didn’t want to re-invent the wheel [with the new logo], but we wanted it to feel bigger, to feel more substantial, which is why it starts with the flip, but suddenly it’s more dimensional as we go through the lettering and it reveals itself with the metallic sheen before settling into the white-on-red, well known Marvel logo, with the added flourish of the arrival and the announcement of the Studios at the bottom of the word Marvel.

The new logo will be seen on all subsequent feature film releases, as well as the television series, Agents of S.H.I.E.L.D. With the addition of the new logo, Marvel Studios also added a fanfare to accompany the logo, composed by Brian Tyler, who wrote the scores to Iron Man 3 and Thor: The Dark World. 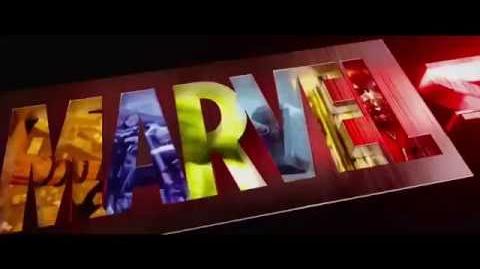