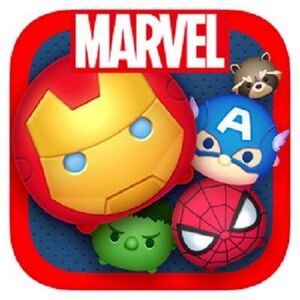 Marvel Tsum Tsum was a Marvel Comics themed stacking game that was released in Spring 2016 in select territories and releasing worldwide on August 31, 2016. The game was shut down on October 31, 2017.

The game functions in a similar way to the Disney Tsum Tsum game with the connecting of Tsum Tsum in a line to eliminate them within sixty seconds and the inclusion of a Mega Charge mode, which is similar to the Disney version's Fever mode.

Outside of the gameplay that is replicated from Disney Tsum Tsum, there are additions exclusive to this version of the game such as the addition of a second ability that requires more Tsum Tsum to activate. Boss battles have been added where the player plays against another character, and has to defeat the boss in order to win, with any potential objectives if playing in the Stage mode.

A player can use up to three Tsum Tsum (one serving as the leader and two being support) as those Tsum Tsum are used for each game in any mode. In Battle mode, bonuses can be created by combining together different Tsum Tsum of the same type.

The first mode is the regular Stage mode where there is a certain amount of levels with mini-bosses and a boss present in each stage. The player can earn up to three stars for accomplishing each task for each individual star, with the first star being earned by meeting the requirement for the level. The second and third stars can be earned by reaching a certain score. There are also bonus levels that can unlocked with a certain amount of stars from the regular parts of the stage. Regular levels are represented with yellow stars with bonus levels being represented with white stars. Players can earn prizes for different amounts of stars obtained. In order for the player to continue further, the player must obtain at least one star.

The two forms of currency in the game are coins and orbs. Coins can be bought with orbs or earned by playing the game. Orbs can be bought with real-world money in addition to being earned through obtaining a certain amount of stars and defeating certain levels of difficulty in Battle mode for the first time, among other miscellaneous forms.

ISO-8 can be obtained through Battles, getting duplicate Tsum Tsum, or obtaining stars. There are six different colors, with Green (Power), Blue (Speed), and Red (Power) being representative of each class and the universal colors of White, Purple, and Pink used for leveling up characters.

Retrieved from "https://disney.fandom.com/wiki/Marvel_Tsum_Tsum_(game)?oldid=3636251"
Community content is available under CC-BY-SA unless otherwise noted.