Marvin Davis (December 21, 1910 - March 8, 1998) was a master planner, art director, and scenic designer. He was remembered by Disney fans for turning Walt Disney's idea for Walt Disney World and Epcot into workable site plans. In Disneyland, he designed the exterior of The Haunted Mansion, Sleeping Beauty Castle and the buildings on Main Street, U.S.A.. Davis drew the master plan for Walt Disney World and contributed to the design of Disney's Contemporary Resort and Disney's Polynesian Resort. In addition to the theme parks, he was also involved in the art direction and scenic design for several Disney films and television shows (such as Zorro and Walt Disney's Wonderful World of Color. 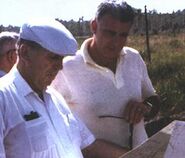 Marvin Davis with Walt Disney in Florida, working on the plans for Walt Disney World.
Add a photo to this gallery
Retrieved from "https://disney.fandom.com/wiki/Marvin_Davis?oldid=3169497"
Community content is available under CC-BY-SA unless otherwise noted.