Riley Stearns (2010-2017; separated)
Mary Elizabeth Winstead is an American actress. She is well known known as Lucy McClane in the Die Hard franchise and Ramona Flowers in Scott Pilgrim vs. the World. She also played Jessica Bennett in the NBC series Passions.

For Disney, she portrayed Gwen Grayson in the 2005 superhero film, Sky High. 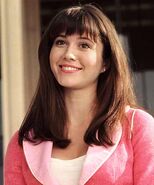 Mary Elizabeth Winstead at premiere of Sky High in July 2005.

Mary Elizabeth Winstead arrives at the 69th annual Emmy Awards in September 2017.
Add a photo to this gallery

Retrieved from "https://disney.fandom.com/wiki/Mary_Elizabeth_Winstead?oldid=3999810"
Community content is available under CC-BY-SA unless otherwise noted.