Mary Jessica Gibbs is an American former child actress and voice actress who is best known for voicing Boo in the 2001 Disney/Pixar film, Monsters, Inc.. She also voiced Sha-Ron in Mulan II (2004). She is the daughter of storyboard artist Rob Gibbs and niece of composer Richard Gibbs.

Having been two years old at the time of filming for Monsters, Inc., the crew found that Gibbs was unable to sit still in the recording booth, and so they followed her around the studio with a microphone to record her dialogue.

Gibbs returned to her acting career in 2022 in the audio-drama series Heroes of Extinction as the voice of Jessica Jenson.

Young Riley Andersen
(Inside Out) 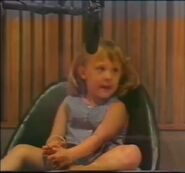 Mary Gibbs behind the scenes of Monsters, Inc.

Mary Gibbs at the premiere of Monsters, Inc. in October 2001.

Mary Gibbs (right) and Linda Larkin at the 2019 MouseCon.
Community content is available under CC-BY-SA unless otherwise noted.
Advertisement