Mary Jo Catlett is an American actress and voice actress who is best known for voicing Mrs. Puff on the Nickelodeon animated series SpongeBob SquarePants.

For Disney, she voices Aunt June on the Disney Channel animated series Kim Possible. She also plays Mrs. Strausser in the ABC TV show, The Kids are All Right and Mrs. Applebaum in "That's So Raven". 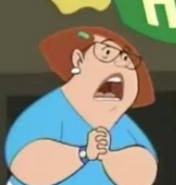 Aunt June
(Kim Possible)
Add a photo to this gallery
Retrieved from "https://disney.fandom.com/wiki/Mary_Jo_Catlett?oldid=3901924"
Community content is available under CC-BY-SA unless otherwise noted.