She doesn't know how to text or use a cell phone. Amy Duncan becomes her friend and teaches her to do so. She enjoys knitting, reading knitting magazines, of which she stashes in her purse ("The Curious Case of Mr. Dabney"), playing jigsaw puzzles, singing and playing the organ ("Gabe's 12-½ Birthday" and "Name That Baby")

Mary Lou was a boring, lethargic character that was addicted to knitting, prior to meeting Amy, who now refers to her as her "best friend", though Mary Lou believes that she is of higher social status than her. She is shown to be very protective of her daughter, Ivy, as she often restricts Ivy from going to parties. ("Appy Days")

Mary Lou is a very good singer and even won a singing contest before. ("Amazing Gracie" and "Alley Oops") 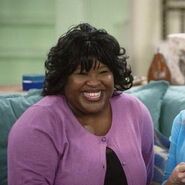