Mary Poppins is an upcoming ride attraction, which is being developed in the United Kingdom Pavilion at Epcot's World Showcase.

On September 13, 2018, despite rumors of a dark ride being in development, it appeared that a Mary Poppins flat ride would instead be the attraction getting added to Epcot’s United Kingdom Pavilion. A flat ride, believed to be a spinner, such as Dumbo the Flying Elephant (most likely based on the "Jolly Holiday" scene’s carousel), was in the early stages of development for the World Showcase Pavilion. It is unknown exactly what the theme of the ride will be, but it seems unlikely that the UK Pavilion would be expanded in any way as was rumored with the addition of a full-blown ride through attraction for Mary Poppins. The ride would likely replace the garden and bandstand area towards the back of the existing pavilion. World Showplace would survive in these plans as it is a profitable venue used for many events, including the annual Party for the Senses.

On August 25, 2019, it was announced at D23 Expo’s “Disney Parks, Experiences, and Products” panel that a long-rumored, yet surprise Mary Poppins neighborhood would be coming to Epcot. Originally thought to become a flat spinner ride, it appears the project was expanded into its very own neighborhood in the form of "Chery Tree Lane."

On July 15, 2020, when Epcot officially reopened, both "Spaceship Earth: Our Shared Story" as well as the Mary Poppins attraction's sequences were removed from The EPCOT Experience. When asked for comment, a spokesperson for Disney said, "As with most businesses during this period, we are further evaluating long-term project plans. The decision was made to postpone development of the 'Mary Poppins'-inspired attraction and Spaceship Earth at this time."[1]

Taking place during the events of the original 1964 film (as confirmed by Bob Chapek during a D23 Expo presentation), guests will step back in time to 1910, down Cherry Tree Lane past Admiral Boom's house, then enter Number 17, the Banks family's home, where the adventure will begin.

A concept artwork for the attraction 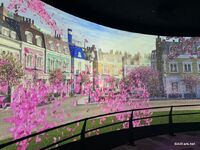