Mary Poppins Returns
Mary Poppins is a 1964 American musical hybrid film presented and produced by Walt Disney Productions and distributed by Buena Vista Distribution, based on the Mary Poppins series of children's books written by P.L. Travers. Songs in it are by Richard M. Sherman and Robert B. Sherman.

The film was released to great critical praise and famously nominated for thirteen Academy Awards, making it as the Oscar most-nominated Disney-film. Although it was favored highly to win the Best Picture award in 1965, it lost it to My Fair Lady, another musical film. Nevertheless, it still managed to win five awards out of thirteen, most notably Best Actress for Julie Andrews for her portrayal as the title role.

In 2006 the film ranked #6 on the American Film Institute's list of best musicals. It also had one of the larger parts of The Great Movie Ride, having both a poster in the "lobby" of the "theater" (the station) and a scene with an animatronic Mary and Bert. It is largely considered as the greatest Disney live-action movie.

At the beginning of the movie, Mary touches her makeup as she perches on a cloud high above 1910 London. The action then descends to Earth where Bert, a cockney jack-of-all-trades, introduces the audience to the Banks, a well-to-do but troubled family headed by the rather cold and aloof George and his loving but highly distracted wife, Winifred. Their latest nanny, Katie Nanna, has just quit out of exasperation at the indiscipline of their children, Jane and Michael, a fact that Winifred only belatedly becomes aware of, due to her ongoing preoccupation with suffragette rallies.

Upon learning of the situation, George decides to take a personal hand in the hiring of a replacement nanny and insists on a stern authoritarian type to control Jane and Michael. However, they take it upon themselves to draft an advertisement for a fun person who would not be a tyrant. He rejects their proposal, tears up their ad, and throws the pieces in the fireplace. They magically fly up the chimney for Mary to piece together and read.

The next day there is a long line of old (and thoroughly disagreeable, in Jane and Michael's opinion) nanny candidates waiting at the Banks' door. However, a strong gust of wind literally blows them away while Mary flies down with her umbrella to apply. The interview with George goes quickly when he is stunned to see that she has responded to Jane and Michael's ad (rather than his own) despite the fact that he destroyed it. As he tries to fathom this mystery, she hires herself and begins work.

Jane and Michael face surprises of their own as they discover that Mary's method of arrival is only the beginning of her magical talents. With songs and magic, numerous wondrously impossible things happen starting with her bottomless carpet bag, and her making the nursery tidy itself to the tune of "A Spoonful of Sugar". The magic continues with a wondrous outing that begins by literally jumping into a chalk pavement drawing with Bert, and later having tea while suspended in midair with Mary's joking Uncle Albert, who floats uncontrollably whenever he laughs.

George grows increasingly uncomfortable with Jane and Michael's stories of their adventures and how they are enchanted by Mary. However, she effortlessly inverts his attempted dismissal of her services into a plan to take them with him to the bank where he works. Unfortunately, the occasion takes a disastrous turn when his extremely elderly boss, Mr. Dawes Sr., personally tries to persuade Michael to invest his tuppence, which he intends to use to buy food from a local Bird Woman, to the point of stealing it out of his hand. When he loudly protests, the other customers suddenly panic and start a bank run that forces it to suspend business. In the resulting chaos, Jane and Michael flee in fear, wander into the slums of the East End, and become lost. Fortunately, they literally run into Bert, currently employed as a chimney sweep. He takes them safely home while explaining that the incident at the bank does not mean George hates them, but rather is a sign of the fact that he has preoccupying problems of his own.

Upon arrival at the Banks' house, a departing Winifred asks Bert to watch Jane and Michael until she gets home as it's Mary's day off, where he ends up sweeping the chimney while they watch. Mary arrives back to caution them about the hazards of that activity. However, they are sucked up the chimney to the roof. Bert and Mary follow to retrieve them. Taking advantage of the situation, they lead a military-style tour of the rooftops of London that concludes with a joyfully energetic dance with Bert's chimney sweep colleagues as they demonstrate their acrobatic skill to the music of "Step in Time". A volley of fireworks from the Banks' eccentric neighbor, Admiral Boom, sends them back down the chimney into the house.

George arrives home, forcing Mary and Bert to conclude the festivities. He then receives a phone call from work ordering him to return immediately to disciplinary action. As he gathers his strength to face his superiors, Bert points out that while he does need to make a living, his offspring's childhood will come and go in a blink of an eye, and as a father, he needs to be there for them while he can. After Bert leaves, a despondent Michael comes and gives him the tuppence he refused to give to Mr. Dawes Sr. earlier that day, in hopes that it will make everything all right. A somber and thoughtful George proceeds to the bank where he is fired in the most humiliating way possible for causing the first run on there since 1773. However, after being left at a loss for words when ordered to give a statement about his dismissal, he realizes the true priorities of life and gleefully uses Mary's all purpose word, "Supercalifragilisticexpialidocious", to tweak Mr. Dawes Sr. He then tells him one of Uncle Albert's jokes and raucously departs to the amazement of his ex-colleagues. Mr. Dawes Sr. mulls over the joke, finally "gets it", and floats up into the air, laughing.

The next morning, the wind has changed and to Jane and Michael's sorrow, Mary must depart. However, George, now loving and joyful, reappears after a long night's disappearance with an amended kite for Jane and Michael and an urge to play with his family. Winifred also realizes that she's been neglectful of Jane and Michael, and supplies a tail for the kite, using one of her suffragette sashes. They all leave the house without a backward glance as Mary watches from a window in one of the lower levels. In the park with other kite-flyers, George meets Mr. Dawes Jr. who says that his father literally died laughing at the joke. Instead of mournful, he is delighted that his father died happy and rehires George to fill the sudden opening. The last scene of the film shows Mary taking to the air, where she returns to the clouds with a farewell from Bert. In the closing credits, we see the text "Nacvid Keyd", which gets scrambled into "Dick Van Dyke".

A number of other songs were written for the film by the Sherman Brothers and either rejected or cut for time. Richard, on the 2004 DVD release, indicated that more than 30 songs were written at various stages of the film's development. No cast recordings of any of these songs have been released to the public, only demos or later performances were done by the songwriters - with the exception of the rooftop reprise of "Chim-Chim-Cheree" and the "smoke staircase yodel" mentioned below.

The Compass Sequence, a precursor to "Jolly Holiday", was to be a multiple-song sequence. A number of possible musical components have been identified:

The film received 13 Academy Awards nominations and won 5 awards.[3] This makes Mary Poppins the most Oscar-nominated Disney film in history.

The film was first released in the Early 1980's on VHS and laserdisc. In 1994, 1997, and 1999, it was re-released three times as part of the Walt Disney Masterpiece Collection. In 1998, it became Disney's first DVD. In 2000, it was released on VHS and DVD as part of the Gold Classic Collection. In 2004, it had a 2-Disc DVD release in a Digitally Restored 40th Anniversary Edition. On January 27, 2009, it was released on DVD again as a 45th-anniversary edition, with more language tracks and special features. A 50th Anniversary Edition Blu-ray was released in December 2013.

The film's copyright was renewed on February 4, 1992.[6] The copyright to the story it is based on was also renewed in the U.S.[7]

In 2018, Disney produced a sequel to the film which takes place 20 years after the first one and focuses on Mary's continued adventure with the Banks family. 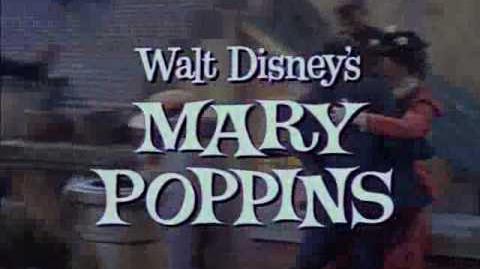