Masi was born in Tokyo, Japan, though his family moved to Los Angeles, California when he was a kid. He attended elementary school at Mirman School and graduated high school from Harvard-Westlake School in 1992. He graduated with a Bachelor of Science degree in computer science and mathematics (with a minor in theater) from Brown University in 1997. He later worked at George Lucas's Industrial Light & Magic as a programmer working on many top-grossing Hollywood movies, such as Episodes I-III of the Star Wars series and the Pirates of the Caribbean series. 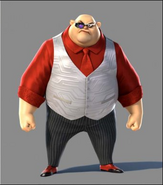