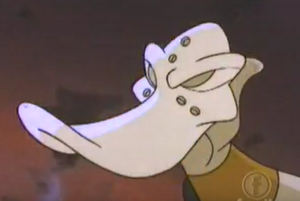 The Mask of Drake DuCaine was an artifact from Puckworld's ancient past, a bio-mechanical cybernetic interface device, created by the legendary duck warrior Drake DuCaine, with the power to penetrate the Saurians' dark magic and cloaking technology. Once he donned the Mask, Drake was able to locate the Overlords and, with the help of his fellow rebels, imprison the evil ones in a dimensional limbo.

The legendary Mask gives the wearer computer-enhanced vision and an intimidating appearance. Also, only a duck can wear the mask and use its powers. Anyone else who tries is stunned by a surge of electricity.

When Puckworld was captured by Lord Dragaunus, a rebel fighter named Canard was the one who found the legendary Mask of Drake DuCaine and organized the resistance against their Saurian overlords. Canard’s mission was successful and Dragaunus was forced to flee Puckworld and set course for Earth. Unfortunately, in order to save his team from perishing in the dimensional limbo, Canard sacrificed himself, passing the Mask and leadership on to his old friend Wildwing.

Retrieved from "https://disney.fandom.com/wiki/Mask_of_Drake_DuCaine?oldid=3508004"
Community content is available under CC-BY-SA unless otherwise noted.