Thieves trying to steal his treasure or his money

Duck Avenger (nephew)
Masked Tophat is Scrooge McDuck's superheroic alter ego. He appears for the first time in Italian comic story "The Duck Avenger and the Mystery of Tuba Mascherata" by Massimo Marconi, and with drawings by Massimo de Vita.

When Scrooge fails to hire Paperinik or Paperinika to protect a gold cargo from possible criminals, he decides to become a "masked hero," convinced that the menacing look of a champion of justice will scare away the criminals. He fortuitously manages to defeat the Beagle Boys, but faints in the scuffle. Paperinik, Paperinika and Battisia rush to the scene and discover the true identity of the new superhero, but do not spread the news. In the end, the two ducks, feeling guilty for not providing aid for Tophat, promise that from now on they will always be superheroes at their friends' disposal.

Masked Tophat makes an appearance in the saga Ultraheroes occurring in the last plates of the story; expressing his regret at not being invited into the group, also boasting of being the most powerful superhero of all. In this appearance, as well as all the other superheroes that appear in the saga, do not wear the classic costume, but a dress much more modern and futuristic. The mask, in addition, is no longer a top hat but a pair of unique glasses lenses that resemble those of Paperinika.

Another cameo of this character has been in the history Paperinik Gyro and the Strike, in which Paperinik understands how important are the devices Gyro Gearloose creates for him, staged an alternative future without Paperinik, in which Scrooge is crazy and roams the city disguised as a Masked Tophat. 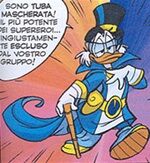 Masked Tophat as he appears in the Ultraheroes
Community content is available under CC-BY-SA unless otherwise noted.
Advertisement