Bonnie's best friend
Owner of the Battlesaurs and Reptillus Maximus

Reptillus Maximus and the Battlesaurs, playing video games, hanging out with Bonnie

Not being able to play his video games

His father
Mason is a major character in Toy Story That Time Forgot. He appears to be Bonnie Anderson's best friend and is the owner of the Battlesaurs and Reptillus Maximus. He is also shown to have a rather rich family, as shown by his house, his entire collection of Battlesaurs, and his brand new video game console. He is voiced by R.C. Cope.

He is first seen playing his new games console which he got for Christmas before he notices Bonnie and invites her to join him. She then throws her bag of toys containing Woody, Buzz, Rex, Trixie, and Angel Kitty into the neighboring playroom. It is here that the gang first meets the Battlesaurs, along with Reptillus Maximus. He is later seen when The Cleric is observing both him and Bonnie playing video games, and Woody and Buzz realize that while Mason is distracted with his gaming, The Cleric can rule over the Battlesaurs without interference from the boy. When Trixie convinces Reptillus to accept that he is a toy and that Mason is his owner, he turns off the power to the game to get Mason's attention. When the latter goes to turn the power back on, he finds Reptillus instead and decides to play with him after he sees Bonnie having fun playing with the toy. They then run into the playroom, saving Woody and Buzz from execution by "The Pit", and they enjoy the rest of the day playing with their toys. Later that night, Mason is shown to have written his name on Reptillus' hand, signifying his ownership of the toy just like Andy and Bonnie did. He also appears to have chosen Reptillus as his favorite toy. 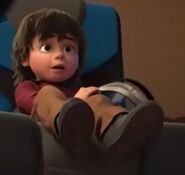