All info provided by Master Sensei at Kim Possible Wiki

Martial Artist
Master Sensei[3] is the head teacher of the Yamanouchi Ninja School. He has many different skills and he has mastered Levitation and Astral Projection.

He has instructed many ninja students:

Master Sensei also knew that both Monkey Fist and Ron Stoppable were exposed to Mystical Monkey Powers. He was also aware that Ron had some deep-rooted monkey issues, as well as Ron being the anointed prophesized Ultimate Monkey Master. That is probably the major reason why he arranged for the two schools to do the Exchange Program for a week. It was very important that he met Ron Stoppable, and to help prepare him some for his destiny of being the Ultimate Monkey Master. Like Yori, he really believes in Ron.

In the episode "Big Brother," Master Sensei secretly arranged for Mr. Stoppable and Mrs. Stoppable to adopt Hana Stoppable, who knew that she was the prophesized Mystical Weapon because he knew that it was imperative in both, Ron and Hana's Destinies that they be brother and sister. He chose to place Hana with the Stoppable Family when Monkey Fist was searching for the mystical keys concerning the Mystical Weapon, who was Hana Stoppable. He knew that Ron needed to prepare her for her upcoming battle against the Yono the Destroyer. He did not tell this to Ron, though. He waited until Ron and Kim Possible, both saw Baby Hana walking on the ceiling, and begin trying to find out about Hana's adoption agency, which of course led them back to Master Sensei and the Yamanouchi Ninja School. He broke this information to Ron, in much the same way as Ron's own parents break major news to him, "This is my way of telling you." Thankfully, Ron teaching Hana to turn the "page," and to dance to the Flippies helped her to win and defeat Monkey Fist and the Yono. In the battle against Yono the Destroyer, he was the second one turned into stone (Rufus was first, and Kim was third). 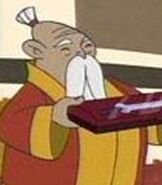