Matt Braly grew up listening to his grandmother tell stories about her life as a little girl in the Philippines. This inspired him to get into animation so that he can tell his own stories. Before arriving at Disney Television Animation, he worked at other studios, such as DreamWorks Animation on the feature film, Turbo and an episode of Steven Universe on Cartoon Network.

Once he got hired at Disney, he started working as a storyboard artist and director on Gravity Falls and also got to do additional work on DuckTales and Billy Dilley's Super-Duper Subterranean Summer. He began working on episodes for Big City Greens when he left that show to start his own.

He created Amphibia, loosely based on his grandmother's childhood as well as his own fascination for frogs. He also provides additional voices and voiced Chuck in the episodes "The Big Bugball Game", "Handy Anne", Maddie & Marcy, and "Battle of the Bands" and Frobo in the episodes "Friend or Frobo?" and "True Colors". 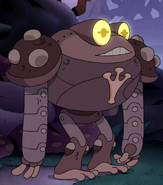