1979-present
Matthew Raymond "Matt" Dillon is an American actor and film director known for his distinctive deep, husky baritone voice. He is known for his roles in multiple films such as Dallas "Dally" Winston in The Outsiders, Jeffrey Willis in The Flamingo Kid, Bob Hughes in Drugstore Cowboy, Patrick Healy in There's Something About Mary, and Sam Lombardo in Wild Things.

For Disney, he played the role of Tex McCormick in the 1982 drama Tex, Trip Murphy in the 2005 comedy Herbie: Fully Loaded, and Troop Leader Barry Taylor in the 2009 comedy Old Dogs. He also played Tommy "Birdman" Rowland in the 1996 Miramax Films drama Beautiful Girls.

Matt Dillon with his younger brother, Kevin attending the season 3 premiere of Entourage in June 2006.

Matt Dillon speaks at the Wayward Pines panel at the 2015 Winter TCA Tour. 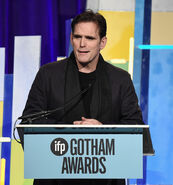 Matt Dillon attending the 71st annual Cannes Film Fest in May 2018.
Add a photo to this gallery
Retrieved from "https://disney.fandom.com/wiki/Matt_Dillon?oldid=3942828"
Community content is available under CC-BY-SA unless otherwise noted.