1
Matthew George "Matt" Frewer is an American-Canadian actor, comedian, and screenwriter, who is well known for his roles such as the title character in the 80's sitcom Max Headroom (a role which he reprised in several other media) and as Dr. Aldous Leekie on BBC's Orphan Black.

For Disney, he is best known for providing the voice for Panic in Disney's 1997 animated feature film, Hercules, he later reprised his role in the television series, House of Mouse, Sorcerers of the Magic Kingdom and World of Color: Villainous. He also provided the voice of Chaos in the Aladdin television series, Jackal in Gargoyles, Dr. Wally Pretorious in Mighty Ducks, a general in The BFG, and Russ Thompson, Sr. in Honey, I Shrunk the Kids. 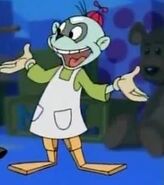 The Toymaker
(House of Mouse) 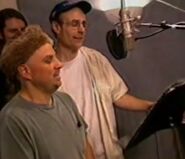 Matt Frewer and Bobcat Goldthwait behind the scenes of Hercules.