Disney Wiki
Register
Don't have an account?
Sign In
Advertisement
in: People, 1960s births, People from Connecticut,
and 11 more
English

As a TV writer, Hoverman won the 2014 Daytime Emmy for Outstanding Writing in an Animated Program and the 2015 Humanitas Prize for Children's Animation for his work on the long-running PBS Kids TV show, Arthur.

Moving to Disney, he works as a screenwriter and storyboard artist for the Disney Junior shows: Sofia the First (in which he voiced the Giggling Goblin), Elena of Avalor, and Goldie & Bear. 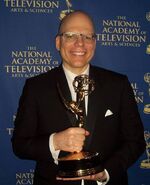