MacKenlee Faire Lanter
Matthew MacKendree "Matt" Lanter is an American actor, voice artist, former reality TV personality, and model. He gained a fame for his role as Liam Court in the CW hit teen drama series 90210, a spin off of the 1990's Fox series Beverly Hills, 90210. He later gained more recongition for his role as Wyatt Logan on CBS' Timeless. He also played Chicago in Pitch Perfect 3.

For Disney, he provided the voice of Sled in the 2012 Disney Fairies film Secret of the Wings, and also is the voice of Anakin Skywalker in Star Wars: The Clone Wars, Star Wars Rebels, Star Wars: Forces of Destiny, and The LEGO Star Wars Holiday Special, and he played a New Republic Officer in The Mandalorian. In Ultimate Spider-Man, he voiced Harry Osborn, Venom, Flash Thompson, and Ulysses Klaw. In addition, he made guest appearences in such ABC shows, such as 8 Simple Rules and Grey's Anatomy.

Sled
(Secret of the Wings)

Matt Lanter at premiere of Star Wars: The Clone Wars in August 2008.

Matt Lanter at premiere of Secret of the Wings in October 2012. 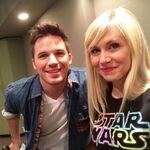 Matt Lanter speaks at the Timeless panel at the 2016 Summer TCA Tour. 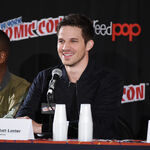 Matt Lanter at premiere of Star Wars: The Rise of Skywalker in December 2019.
Community content is available under CC-BY-SA unless otherwise noted.
Advertisement