The fish hook of the god Māui

“Can't you shape-shift or something?"
"You see my hook? No magic hook, no magic powers!
”
―Moana and Maui, as they attempt to escape from the Kakamora

Maui's fish hook is an magical item that appears in Moana. It belongs to the demigod Maui.

The fish hook is a sizable bone-like weapon created by the gods of Polynesian lore. It was given to Maui after the gods adopted the former and turned him into a demigod with supernatural power. It had since been used throughout his exploits and has considerable magical abilities. Like its owner, the fish hook has elaborate markings engraved on it, representing the various tales and adventures it has been used in. According to Maui, he used the fish hook to slow down the sun itself, pull islands out of the sea, and battle colossal monsters. Aside from being a weapon, Maui also uses the fish hook in his dances and performances, swinging it around himself as he does so.

The hook is notable in that it grants Maui the ability to shapeshift. The hook itself disappears into Maui's animal body whenever he does so, as its shape is seen on the wing of Maui's hawk form. Without the hook, however, Maui cannot perform this ability.

Thousands of years before the film, Maui lost this weapon after his theft of the heart of Te Fiti and his subsequent battle with the lava demon Te Kā. The fish hook was lost in sea, and eventually was found by Maui's arch-rival Tamatoa, who placed the fish hook on his shell as a prize.

Years after the legendary battle, Maui and a mortal girl named Moana sail to Lalotai to retrieve the fish hook. Even when Maui manages to get it back, the hook and its ability did not allow its previous owner to transform into the animal that he wants; it even turned the top part of the demigod's body into a shark's head. Eventually, with Moana and Mini Maui's help, the hook was able to respond to Maui's shapeshifting commands.

When the duo are ready to face Te Kā, Maui is initially able to use the fish hook and holds fighting Te Kā for a while. However, when blocking a blow from the demon, the fish hook is severely cracked, hampering its power. Angered over the state of his hook and Moana's refusal to turn back when they had the chance, Maui briefly leaves Moana, but later has a change of heart and rejoins her second battle with Te Kā. This time, Maui has better success with the fish hook in keeping Te Kā occupied as Moana tries to reunite Te Fiti with her heart. However, the fish hook is eventually destroyed after Te Kā strikes at it once more.

After it is discovered that Te Kā was truly Te Fiti, Moana is able to restore the goddess and Maui apologizes to Te Fiti for his transgression. In response to his modesty, Te Fiti recreates the fish hook and gives it to Maui, allowing Maui his shapeshifting abilities once more.

The fish hook appears in the seventh season episode "Knightfall", in the possession of Captain Ahab. The Wish Realm's Hook goes to see Rumplestiltskin, who insights him on Maui's Fish Hook, which has the power to destroy prisons. Hook bests Ahab in a game of dice, and takes possession of magical weapon, in order to free his daughter from a tower, but is unable to use it, due to Gothel's interventions. It makes its reappearance in "Leaving Storybrooke", when it's summoned to the heroes in order to free them a snow globe prison, created by the Wish Realm's version of Rumplestiltskin.

Maui's hook on Tamatoa's back

A close-up of the hook in the end credits

Maui's fish hook in Once Upon a Time

The fish hook on display in Ralph Breaks the Internet. 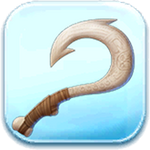