Bronwyn FitzSimons
Maureen O'Hara was an Irish film actress and singer. Her only Disney role was Maggie McKendrick in The Parent Trap. She was considered the role as the title character in Mary Poppins, along with several actress that were considered, but the role was later given to Julie Andrews. 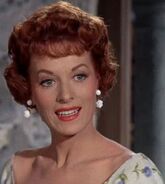 Maggie McKendrick
(The Parent Trap)
Add a photo to this gallery
Retrieved from "https://disney.fandom.com/wiki/Maureen_O%27Hara?oldid=4193299"
Community content is available under CC-BY-SA unless otherwise noted.