2
Carl Adolf "Max" von Sydow is a Swedish actor who has also held French citizenship since 2002.

His roles included Sigmund Freud in The Young Indiana Jones Chronicles episode "Vienna, November 1908", which later became the first part of the full-length feature film The Adventures of Young Indiana Jones: (Chapter 3) The Perils of Cupid. He also portrayed Judge Fargo in Judge Dredd, Lassefar in Pelle the Conqueror, Papinou in The Diving Bell and the Butterfly, and Lor San Tekka in Star Wars: The Force Awakens.

He also voiced the narrator in Europa, and Zeus in the Swedish dub of Hercules. 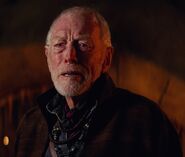 Retrieved from "https://disney.fandom.com/wiki/Max_von_Sydow?oldid=3691442"
Community content is available under CC-BY-SA unless otherwise noted.