2
Mayim Chaya Bialik is an American actress, voice actress, and neuroscientist. She is well known for her portrayal of Dr. Amy Farrah Fowler on the CBS television show The Big Bang Theory.

For Disney, she played CC (age 11) in the 1988 Touchstone Pictures film Beaches, Blossom Russo in the Touchstone Television TV show Blossom, Kristen Kurst in Recess, Mean Cindy in Lloyd in Space, Justine Flanner in the Kim Possible episode "Partners", and Dr. Wilameena Bink in the ABC Family TV show The Secret Life of the American Teenager. She also provided the voice of Willoughby in Star vs. the Forces of Evil. 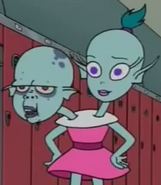 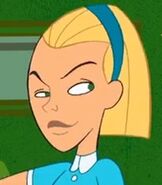 Willoughby
(Star vs. the Forces of Evil)
Add a photo to this gallery

Mayim Bialik speaks onstage during the 24th annual Critics' Choice Awards in January 2019.
Add a photo to this gallery
Retrieved from "https://disney.fandom.com/wiki/Mayim_Bialik?oldid=3932571"
Community content is available under CC-BY-SA unless otherwise noted.