Reunites with Mike and Matt after Ernest defeats Trantor
Mayor Murdock is that of Briarville in Ernest Scared Stupid.

Murdock's two sons, Mike and Matt, are bullies of a middle school. They both disliked Elizabeth's classroom report about Briarville's legend of Trantor and Phineas Worrell. They later destroy Kenny Binder's cardboard haunted house. They're then mistaken for trolls by Ernest, but nobody believes him, especially Cliff Binder, the town sheriff, after the exposure of the two trolls really being Mike and Matt. Matt becomes Trantor's wooden doll until Ernest defeats Trantor once and for all. 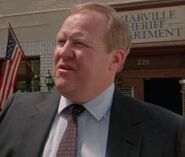 Ernest has the Mayor's back while the car window is broken.

Add a photo to this gallery
Retrieved from "https://disney.fandom.com/wiki/Mayor_Murdock?oldid=3809560"
Community content is available under CC-BY-SA unless otherwise noted.