Images of the Mayor of Halloween Town from The Nightmare Before Christmas.

Concept art of the Mayor of Halloween Town.

Concept art of the Mayor.

The Mayor as visualized by Barry E. Jackson.

A storyboard featuring the Mayor.

Storyboard of the Mayor at Jack's doorstep.

Storyboard featuring Jack and the Mayor.
Add a photo to this gallery

"Our first award goes to the vampires..."

"...for most blood drained in a single evening."

"Jack! I've got the plans for next Halloween!"

"I'm only an elected official. I can't make decisions by myself!"

"Where have you been?"

The mayor announcing the town meeting

"I knew this Christmas thing was a bad idea."

The Mayor as he appears in Kingdom Hearts.

The Mayor as he appears in Kingdom Hearts II.

Mayor of Halloween Town in The Nightmare Before Christmas: The Pumpkin King 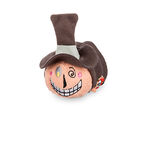 A page featuring the Mayor in the Behind the Scenes book.

In As Told By Emoji.

The Mayor at Disneyland Paris
Add a photo to this gallery
Retrieved from "https://disney.fandom.com/wiki/Mayor_of_Halloween_Town/Gallery?oldid=3509090"
Community content is available under CC-BY-SA unless otherwise noted.