The Force, the Resistance

“If you live long enough, you see the same eyes in different people.”
―Maz Kanata[src]

Maz Kanata is a character in the Star Wars sequel trilogy. Maz owns a castle with a cantina on the forest planet of Takodana, where she hosts various riff-raff and pirate gangs. She owned the lightsaber that belonged to Luke Skywalker and his father in her cantina which she gave to Finn after Rey rejected it, but later Rey claims it for herself. Having lived well over 1,000 years, she is highly knowledgeable and wise, with an ability to see into people's hearts by using the Force.

Maz Kanata first appears in the cantina at her castle on Takodana, where she meets with Han Solo, Rey, Finn and BB-8. There, Han explained that the droid BB-8 contained a map leading to Luke Skywalker, and that it needed to be delivered to his wife, the Resistance General Leia Organa, with whom Han had become estranged. Maz refused to help him, saying that Solo had been avoiding the fight for too long, and he needed to go home. Though Finn objected, Rey asked what fight they were up against, Maz explained that it was the dark side of the Force, which over the course of the millennium of her life, had taken up the forms of the Sith, Galactic Empire and First Order.

Maz went on to argue that they should all oppose the spreading of the First Order, but Finn insisted that a fight against the First Order could not be won. As Finn spoke, Maz crawled up onto the table, and looked into Finn's eyes, saying that he had the eyes of a man who wanted to run. Finn, telling her she did not know the things he had seen, suggested that they all needed to run. Resigned, Maz climbed down from the table and directed Finn to two pirates who would trade work for transportation to the galaxy's Outer Rim Territories, Sidon Ithano, and Quiggold. Finn stood up and left, and when Rey went after him, Maz asked Han who she was. Han then explained that she was a young scavenger from Jakku and wished to return to the planet, due to Rey's belief that her parents would come looking for her there.

“Dear child. I see your eyes. You already know the truth. Whomever you're waiting for on Jakku... they're never coming back. But... there's someone who still could. [...] The belonging you seek is not behind you... it is ahead.”
―Maz Kanata to Rey[src]

Maz then went to speak with Rey, finding her with BB-8 in a lower level hall, stumbling out of a storeroom and looking shaken. Rey, who had a vision after coming into contact with the Skywalker lightsaber, asked Maz what it was, saying she regretted entering the room. Maz explained that the lightsaber belonged to Luke and his father before him, and it was then calling to her. Rey responded by insisting she return to Jakku, but Kanata, removing her goggles and taking the girl's hand, told her that she already knew the truth: whomever Rey was waiting for would never be coming back. However, Maz added that while no one from Rey's past was returning, someone in the future still could, and that what Rey sought was not behind her, but ahead.

Maz admitted that she was not a Jedi herself, but she still knew the Force, explaining that it moved through and surrounded every living thing. Instructing Rey to close her eyes and feel the light side of the Force, the pirate told the scavenger that it would always guide her, and that the girl should keep the lightsaber. However, Rey stated that she would never touch the weapon again, and that she wanted nothing to do with the Force. Maz stammered as Rey, followed by BB-8, ran from the hall, leaving the pirate alone with her thoughts.

Shortly after Rey left, patrons of the castle hurried outside to witness the destruction of the New Republic's capital, Hosnian Prime, visible in the sky above. Finn deduced it was an act of the First Order, and he regrouped with Solo and Chewbacca, asking where Rey was. Maz approached the group and told them that Rey was where she needed to be, and said there was something they should see. The pirate led them to the storeroom where Rey was, and she presented the lightsaber to Finn. Han Solo, who had been a close friend of Luke's, asked where Maz had gotten the weapon (which he remembered using on Hoth), but she dismissed him, saying it was a story for another time. Telling Finn to find Rey, Maz passed the lightsaber to him, knowing it would prove useful for the fight to come. Before they left the room, the castle shook, signaling the arrival of the First Order, and the hallway collapsed as First Order TIE fighters leveled the castle. Led by Chewbacca, the four cleared a tunnel to the surface, where the Wookiee and Solo immediately joined the battle against the First Order troops.

Finn and Maz exited next, and the pirate ordered Finn to find and help Rey and BB-8. However, Finn insisted that he needed a weapon first, so Maz reminded him that he already had one, seizing his wrist which held the lightsaber. Finn activated the blade and entered the fight alongside Solo and Chewbacca until forces of the Resistance arrived to provide support. However, despite the Resistance's arrival and the retreat of the First Order's forces, Finn was unable to prevent Rey from being taken captive by Kylo Ren. In the battle's aftermath, Maz spoke with BB-8, telling the droid that although the First Order took Rey, they could not give up hope, and the Resistance needed the astromech's help. Maz then walked over to Finn, joking that she had some cleaning up to do. Looking up at Finn, she smiled with satisfaction, noting that she no longer saw the eyes of a coward, but the eyes of a warrior.

Man Kanata makes a brief appearance in the film, communicating with Finn, Rose Tico and Poe Dameron, as she finds herself in a blaster dight with her own employees because of an union dispute. She tells them that there is one guy, the Master Codebreaker, that is a hacker who she trusts and can penetrate the encryption codes for Supreme Leader Snoke's flagship, the Mega-class Star Dreadnought Supremacy, so they can hack its tracking systems. Maz tells them that the codebreaker has a red ploom bloom on his lapel and is at the casino in Canto Bight, a city located on the planet Cantonica.

Maz Kanata is seen in the new Resistance base on Ajan Kloss, helping in the war against the First Order. When it was discovered that Emperor Palpatine had returned from the dead and had created the First Order from the shadows while building the Sith Eternal’s fleet of Xyston-class Star Destroyers, the Final Order, Maz proposed that if they wanted to stop Palpatine, they need to find his location, Exegol.

When Leia Organa decided to reach out to her son as she was slowly dying, Maz knew what Leia needed to do to save him. After Leia used the last of her energy to reach her son and Rey during their duel and died, a funeral was held for the late Alderaan princess where Maz sadly looked upon Leia's dead body and bid her farewell.

After the battle on Exegol, Maz saw Leia's body becoming one with the Force at the same time Ben Solo vanished due to transferring his life force to revive Rey. Upon witnessing this, Maz smiled as she knew that Leia was now at peace. When the Resistance returned to Ajan Kloss to celebrate the destruction of Palpatine and the Sith Eternal, Maz presented Chewbacca with Han Solo's Medal of Bravery which he earned after the Battle of Yavin as she knew that Han would want his friend to have it.

Her voice can be heard when Ezra Bridger is wondering in the Word Between Worlds. It is possible to hear Maz speaking to Rey in a scene set in the future that happens in The Force Awakens, where she tells Rey that her parents will never come back and that the belonging she seeks is ahead.

Maz appears in the animated miniseries with Lupita Nyong'o reprising her role. She is the one who narrates the intro of the shorts,[1] and the character makes an appearance during the episode "Bounty Hunted".

"Dear child. I see your eyes. You already know the truth. Whomever you're waiting for on Jakku... they're never coming back. But... there's someone who still could."

"The belonging you seek is not behind you... it is ahead."

Maz gives the lighsaber to Finn after Rey rejected it.

Maz tells Finn to use the lightsaber to fight during the battle at Takodana.

Maz talks with Poe, Finn and Rose in Star Wars: The Last Jedi.

Rey and Maz in the back room of Maz's cantina.

Maz's final appearance differs greatly from her concept art, in which she has big black eyes and orange skin.

While engaging in a force ritual deep below her castle, Maz and Rey look on as Finn discovers the Skywalker lightsaber inside a hidden compartment in BB-8.

Concept art of Maz and the Resistance in The LEGO Star Wars Holiday Special.

Maz Kanata hands Leia the Skywalker lightsaber shortly after the destruction of her castle by Captain Phasma and her First Order Stormtroopers.

Lupita Nyong'o during the motion capture process for Maz Kanata. 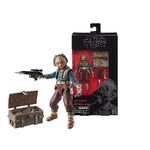 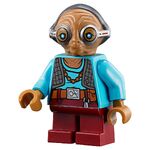 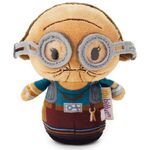