http://www.mcdonalds.com
McDonald's, often abbreviated as Mickey D's, is the world's largest chain of hamburger fast-food restaurants. Although not owned by Disney, it has had several promotional tie-ins with Disney films and properties since 1981. The McDonald's Corporation was responsible for promoting the Pixar movies released between 1998 and 2006. This partnership began from 1987 to 1991, and then again from 1997 to 2006. However, Disney partnered with McDonald's in 1993 to promote the re-release of Snow White and the Seven Dwarfs.

In 2018, it was announced that McDonald's would promote new Disney merchandise since the early years. The partnership started in June with some of the first promotions including Incredibles 2 and Ralph Breaks the Internet.

It was a McDonald's food stand in Disneyland located in Frontierland from 1998 until 2008.

In 2001, the Harbour Galley, a small seafood restaurant in Critter Country which opened in 1989, converted its menu to serve McDonald's fries and drinks until 2008, when it reverted to seafood again.

It was a restaurant in Disney's California Adventure that closed in 2007.

This was one of two McDonald's locations at the Magic Kingdom, located in Frontierland. In 2009, it was given a new name, the Golden Oak Outpost, and a new menu.

This was the second McDonald's location at the Magic Kingdom, located in Fantasyland. Whereas Frontierland Fries only served fries and soda, the Village Fry Shoppe also served hot dogs, carrot cake, Jell-O, and milk (including soy). In 2009, it was renamed The Friar's Nook and given a new menu, consisting mainly of hot dogs and macaroni and cheese.

This was the sole McDonald's location at Disney's Hollywood Studios (back when it was known as Disney-MGM Studios), located in Sunset Boulevard. The place served McDonald's fries, soda, and Dasani bottled water. It became Toluca Legs Turkey Company and then, in 2016, Sunshine Day Cafe.

There have been two McDonald's locations at Walt Disney World. One was at Downtown Disney, which opened in 1997 and closed in 2010. The second location, near the All-Star Resorts and Disney's Blizzard Beach, opened in 1998. In 2009, it received an overhaul, but is still there today.

There is a McDonald's located to the right of The Rainforest Cafe in Disney Village, in Disneyland Paris, opened in January 1999. 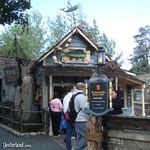 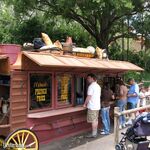 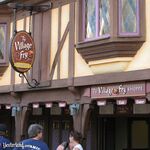 The second McDonald's location at the Magic Kingdom, the Village Fry Shoppe in Fantasyland 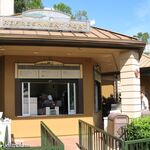 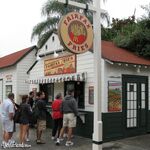 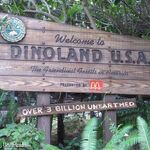 DinoLand U.S.A. was sponsored by McDonald's for a time 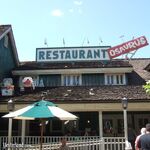 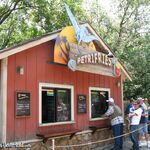 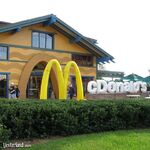 There were two McDonald's locations at Walt Disney World, one at Downtown Disney from 1997 to 2010

The second Walt Disney World location, near the All-Star Resorts, opened in 1998 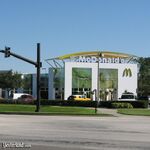 A McDonald's restaurant in Disney Village at Disneyland Paris