English
McFarland, USA is a 2015 live-action sports drama film which was based on a true story of a Latin high school track team from McFarland, California. The film stars Kevin Costner as Jim White, the school's coach who lead the team through a number of 1980s social issues to win a championship. Released on February 20, 2015, the film was directed by Niki Caro and produced by Walt Disney Pictures.

From the official press-release:
Inspired by the 1987 true story, "McFarland" follows high school coach Jim White (Kevin Costner), whose job-hopping leads him to predominantly Latino McFarland High School, located in an agricultural community in California's farm-rich San Joaquin Valley. Jim knows he has to make this school his last stop - he's out of options, with both his career and his family and finds himself in a diverse, economically-challenged community that feels worlds apart from his previous hometowns. Admittedly, the White family and the students have a lot to learn from each other -- but when Coach White notices the boys' exceptional running ability, things begin to change. Soon something beyond their physical gifts impresses White - the power of family relationships, their unwavering commitment to one another, and their incredible work ethic. With grit and determination, Coach White's unlikely band of runners eventually overcome the odds to forge not only a championship cross-country team, but an endearing legacy as well. Along the way, Jim and his family realize that they finally found a place to call home and both he and his team achieve their own kind of American dream.

William Broyles was hired to write the script for the film which has been in development since 2004. Kevin Costner negotiated to star begun in 2012 and been completed in July 2013. The film took place in Camarillo, California. 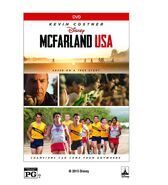