The Meadow of Living Flowers

Alice
The Meadow of Living Flowers is a place where Alice stumbles upon while chasing the White Rabbit after shrinking to the size of an insect.

While Alice was following the White Rabbit while the size of an ant she finds herself unable to catch him while she was that small. Then she noticed the most peculiar butterflies, but someone corrects her, saying that they are 'bread-and-butterflies.' She starts to wonder who could have said that since no one was around but her and the flowers. Then she notices a rocking-horsefly, and then she hears someone talk again and starts to wonder if was the rose who said something. Alice says it's nonsense for flowers to talk, but then the Rose says "We can talk." The Iris adds "If there's anyone worth talking to," and the daisy says "Or about." The pansies then tell Alice that they sing too and then all the flowers start to argue on who they should sing about. The rose suggests that they sing "Golden Afternoon" since it's about all of them and soon they all began to sing beautifully, and even Alice herself joins in. They soon ask about what kind of flower Alice is, believing she is a flower like themselves. They soon make fun of her for her "petals" and "stems" and lack of scent. When Alice protests she is not a flower, they all turn against her since they believe she is a weed.

Lily of the Vally 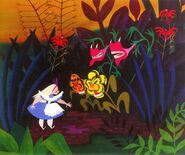 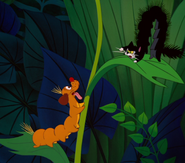