Disney Wiki
Register
Don't have an account?
Sign In
Advertisement
in: Characters, Males, Phineas and Ferb characters,
and 14 more

Phineas and Ferb the Movie: Across the 2nd Dimension (Pictured and mentioned)

Unnamed mother-in-law
Meap[4][5] is a recurring minor character of the popular Disney Channel animated TV show, Phineas and Ferb. In the episodes, "The Chronicles of Meap" and "Meapless in Seattle", he is one of the main protagonists. He is an Intergalactic Security Agent who spends most of his time probing deep space for anything that would pose a threat to extraterrestrial order and safety. Though being relatively small and weak by general appearance, Meap possesses sharp wits and remarkable strength. Over the course of his career, he has faced head-on and overcome countless challenges, eventually leading himself to the respected rank he holds today.

Meap came from a species of small sentient beings that speak solely in a language that takes the form of the word "meap". At some point, he was enlisted in an organization and rigorously trained to be able to confront extraterrestrial criminals in combat. He eventually acquired a state-of-the-art spaceship that would be his means of transportation around deep space. A fellow member of his species, Mitch, is his longest-standing and only known opponent, with whom he has frequently matched tides. ("The Chronicles of Meap" "Meapless in Seattle")

In the midst of a hot pursuit after Mitch, Meap was hit by a stray remote-control baseball from two human beings Phineas and Ferb, damaging it beyond the usable condition and forcing it into an uncontrollable crash-course into Earth. Upon crash-landing in their backyard, Meap was an immediate interest to the boys, who were intrigued by his language, his race, and his superficial appearance as "cute". As they began to repair his ship, he set off after Candace, being mistaken by her as a Bango-Ru doll, and went with her to a Bango-Ru convention.

However, because of Meap's unusual behavior, he, along with Candace was kicked out of the convention. Candace tried to return Meap to her brothers, but when she met with them along with Isabella in the now-repaired ship, she witnessed them being abducted by Mitch, an extraterrestrial poacher who had been using the ship's radar signature to track Meap down. In spite of the communication barrier lying between Candace and Meap they teamed up with each other and worked in cooperation to reach Mitch's space station. After an ensuing struggle in which the five nearly fell into Mitch's custody, Meap managed to subdue Mitch and he was arrested.

A few months later, he gets a picture of Phineas, Ferb and Candace for Christmas ("Phineas and Ferb Christmas Vacation!").

Later on, Meap sought Phineas and Ferb's cooperation when Mitch once again threatened intergalactic peace. Unfortunately for him, he was unable to immediately communicate with them due to the absence of a mustache translator and Mitch's imminent attack, which forced them, Candace, and a recently-arrived Isabella to make a run for it.

When Phineas and Ferb were in the rebuilt Rollercoaster with their friends flying in space, Meap came in his spaceship waving at them and saying "Meap!" He was also seen dancing in Carpe Diem alongside Mitch ("Rollercoaster: The Musical!").

Meap vs. Mitch: Round II

Later on, Meap sought Phineas and Ferb's cooperation when Mitch once again threatened intergalactic peace. Unfortunately for him, he was unable to immediately communicate with them due to the absence of a translation mustache. Subsequently, Mitch tracked them down and attacked, forcing them, Candace, and a recently-arrived Isabella to run. In the ship and with the aid of an emergency mustache, he explained to his entourage of a struggle to attain a grail containing an extremely rare chemical long banned from his home planet, known as Cutonium, which would make it's user unimaginable cuteness, thus making anyone who looks at them directly fall into a cute-trance, and allowing the consumer to easily take over the galaxy. Soon afterward they embarked on a wild-goose chase into Seattle where they attempted to unearth the grail of cutonium, only to be beaten to it when Doofenshmirtz drank it out of stupidity and was seized by Mitch.

As Mitch headed home to extract the chemical from Doofenshmirtz and use it for his own nefarious purpose, Meap in cold pursuit made a distress call towards his planet's government to alert them of his imminent seize of power and have an armed battalion storm his fortress to try and thwart him. The effort was largely in vain, however, as Mitch was already in control of the cutonium by the time the military had penetrated his fortress and he halted the advance with ease by charming them into a hypnotic trance. He did the same with Phineas shortly after. With the same risk facing Ferb, Candace, and Isabella, Meap challenged Mitch himself, only to be pushed aside by the sheer might of the cutonium. Only when Isabella managed to overwhelm Mitch with her own brand of cuteness was he brought under control. ("Meapless in Seattle")

Meap is a very brute force. While being small and of seemingly weak demeanor, Meap can easily take on an opponent more than twice his size, showing either a straight face or utter amusement. He seems to be able to shoot a destructive "rainbow beam" from his mouth. He enjoys his job, as he is very good at it, and will smile while on missions. Like all members of his race, Meap speaks with a complete straight face when speaking his native language, never truly blinking. He is unable to speak English without a translator mustache, as shown in the picture. When a mustache is not in use he can only say the word meap, similar to Beaker from The Muppets.

Meap is very friendly, open to other races with a smile. He was quick to adapt to a level while crashed on the planet Earth, though he was still unaware of several elements, especially to people not understanding his language. He, like humans, is easily annoyed when people are unable to comprehend the simplest of things.

Meap hates and fears his mother-in-law, agreeing with Candace's description of her as a "monster" and running away from her ("The Chronicles of Meap"). 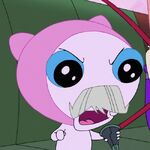 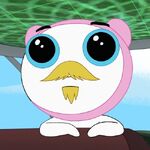 Meap referenced in Phineas and Ferb the Movie: Across the 2nd Dimension.

Meap in Rollercoaster: The Musical!