The Absent-Minded Professor
Son of Flubber
The Computer Wore Tennis Shoes
Now You See Him, Now You Don't
The Strongest Man in the World
Flubber

Medfield College is a fictitious university used as the setting for several films (namely science fiction comedies) made by The Walt Disney Company.

Medfield College is named after the town of Medfield, Massachusetts. According to town historians, friends of Walt Disney lived there, and he would visit them on occasion, landing his plane on a private airstrip on their property. Portions of the airstrip are still present today. The cornerstone of Medfield Middle School, formerly Medfield High School, has a quote from Walt Disney inscribed on it: "Our greatest natural resource is in the minds of our children."

The Fight Song of Medfield College, composed by Richard and Robert B. Sherman, is heard during the beginning credit sequence of The Absent-Minded Professor.

Among the films which feature Medfield there are the Professor Brainard films, The Absent-Minded Professor (1961) and Son of Flubber (1963) where Prof. Brainard is a professor of the college who works in the campus' basement to try and make great inventions.

Medfield was a central location in this film trilogy which involved students of Medfield getting into science fiction hijinks which trouble the Medfield Dean Higgins. Films in this trilogy being The Computer Wore Tennis Shoes (1969), Now You See Him, Now You Don't (1972), and The Strongest Man in the World (1975);

The town of Medfield, the location for Medfield College, was the setting for another Disney film, The Shaggy D.A. (1976).

This 1997 film was a remake of the Absent Minded Professor starring Robin Williams. It had him working as a professor at Medfield and at one point using Flubber on the seals of the school basketball team's shoes to rig the game in their favour.

The college was also briefly referenced in the 2015 comic series Disney Kingdoms: Figment 2. Here the Scientifica Lucida is a university central to the plot which comes to have a campus in Florida. One of the university deans mentions Dr. Brainard coming to work at the location, visiting from Medfield. 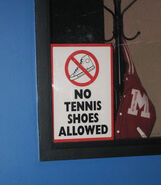