This article is about the weapon used by Jake. For other uses, see Sword (disambiguation).

The Mega-Mecha Sword is said to be a blade of legend. Not much of the tale behind the sword as its origins or who forge it remains a mystery.

While preparing for the Belch Mountain Parkour Race, Jake uncovers the Mega-Mecha Sword within the brush of the Never Land Jungle. Marveling at his newly acquired mechanize blade's various features, Jake begins to neglect his old sword that Peter Pan bestowed upon him.Jake wasn't the only one taken by the Mega-Mecha Sword wonders Captain Hook also has his eye on the sword various features that rival his collection of hook and was determined to claim the sword as his own. Once Jake finally reach the finish line atop of Belch Mountain Hook manages to take the Mega-Mecha Sword for himself leaving Jake to plummet into the volcano. Jake ask Hook to help him out of the volcano, but the volcano starts rumbling, forcing Hook and his crew to flee to safety, leaving Jake to his fate. Fortunately, Cubby, Izzy, and Skully arrive to help Jake, but find themselves also in the volcano. Using Cubby's map, they learn of a secret path to escape the volcano. Equipped with his old sword, Jake finds the confidence and courage to lead his crew out of Belch Mountain and later rescuing Hook and his crew from the danger of the lava flow.

The Mega-Mecha Sword makes one final appearance at the end of the episode still in Hook's control finally successfully stealing a treasure. Hook attempt to try the various feature of his new sword but accidentally turning the Mega-Mecha Sword into a drill which burrows a hole into the deck of the Jolly Roger, forcing the ship to sink. 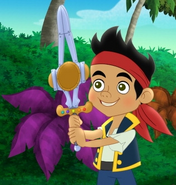