To use in bot fights

To (casually) inspire the making of the microbots

Parts are connected by controlled magnetism, thus for it's insane power and flexibility in combat

Megabot is a small robot created by Hiro Hamada from Disney's 2014 animated feature film, Big Hero 6. It is the main inspiration for the creation of the Microbots.

Megabot is small in size and stature. Its face can alternate between facial expression, ranging from a yellow happy smile to a red demonic grin. This is mostly cosmetic other than to serve as a warning. It was built by Hiro to be used in underground bot fights in San Fransokyo. Although it appears to be an inferior model compared to most bot fighters and has no weapons, its design was meant to be deceptive. It can be easily split into smaller parts of itself and attach to opponents or re-attach to reconstruct itself, then it will use its deadly agility to rip enemies to pieces.

Hiro used it against Mr. Yama and won, and intended to continue using it in more bot fights until he decided to leave this career behind. Afterward, Megabot's layout and design are used by Hiro to build a new invention, Microbots.

When Tadashi died, Hiro was steadily drawn back into bot-fighting. When preparing to leave for a match, one of Megabot's legs fell on Hiro's foot, which activated Baymax. Hiro was fixing his robot's leg before he realized that Baymax had walked out of the house and went after him. Megabot is never seen after that.

After Hiro officially goes straight and quits bot-fighting, Megabot is left dormant. It is sometimes stored in Hiro locker at SFIT and other times at Hiro's bedroom in the Lucky Cat Café. In "The Bot Fighter", Hiro used Megabot as part of his undercover work in Yama's bot-fighting tournament. In during which, Megabot has a rematch against Little Yama, which Hiro is once again successful in defeating. Later, Trina corrupts Megabot to join her giant killer bot hybrid. Hiro is able to override Trina's programming, however, and uses Megabot to defeat Trina's bot. 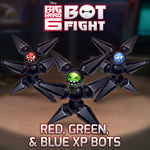 Coming back to Hiro

Megabot on the Big Hero 6 Keyblade of Kingdom Hearts III