Michael A. Katcher (1992-1996)
Nick Offerman (2003-present)
Megan Mullally is an American stage and screen actress, voice actress, comedian, and singer. She is best known for her television role as Karen Walker on the NBC sitcom Will & Grace.

For Disney, she voiced Adele in the 2004 Disney animated film, Teacher's Pet, Mrs. Marilyn Driscoll in Randy Cunningham: 9th Grade Ninja, and Miss Nettle in the Sofia the First episode "Make Way for Miss Nettle". She also appeared in the 2014 Disney fantasy-comedy film, Alexander and the Terrible, Horrible, No Good, Very Bad Day as Nina and the ABC TV show, In the Motherhood as Rosemary. 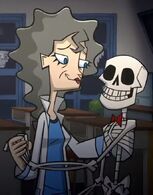 Megan Mullally and her husband, Nick Offerman visit The Late Show with Stephen Colbert in May 2016.

Megan Mullally speaks onstage during the 25th annual Screen Actors Guild Awards in January 2019.
Add a photo to this gallery

Retrieved from "https://disney.fandom.com/wiki/Megan_Mullally?oldid=4117331"
Community content is available under CC-BY-SA unless otherwise noted.