Stephanie, Nicky, Eddie (all with Baum), and Max (with Bancroft)
Mel Brooks (born Melvin James Kaminsky) is an American actor, comedian, director, producer, screenwriter, composer, and lyricist, who is best known for creating broad film farces and comic parodies. He directed and screenplays Young Frankenstein and Spaceballs. He was the writer of the early variety show, Your Show of Shows. He also created, with Buck Henry, the hit comedy series Get Smart from 1965 to 1970. Additionally, he is well-known for his voice roles, including Bigweld in the 2005 Blue Sky film, Robots, Albert Einstein in DreamWorks' Mr. Peabody & Sherman, and Vlad in the Hotel Transylvania film series.

For Disney, he played Professor Max Krassman in Jim Henson's 1979 film, The Muppet Movie, and Melephant Brooks in the 2019 Disney/Pixar film, Toy Story 4. He also played the movie director in Mickey's Audition and voiced Grandpa Mel in Special Agent Oso. In addition, he appeared as himself in Mickey's 50. He even developed a canceled horror-comedy attraction for Disney's Hollywood Studios titled "Hotel Mel", which ended up becoming the inspiration for The Twilight Zone Tower of Terror.

His song "The French Mistake" was featured in Home on the Range. 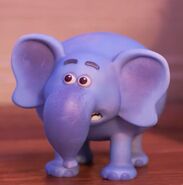 Melephant Brooks
(Toy Story 4)
Add a photo to this gallery

Mel Brooks eating a cheesecake with his second wife, Anne Bancroft in Mickey's 50.
Add a photo to this gallery
Retrieved from "https://disney.fandom.com/wiki/Mel_Brooks?oldid=4499653"
Community content is available under CC-BY-SA unless otherwise noted.