Disney Wiki
Register
Don't have an account?
Sign In
Advertisement
in: Characters, Characters in Disney parks, Females,
and 13 more

However, Big Thunder Mountain was rumored by Natives to be home to the Thunder Bird—a powerful spirit possessing a treasure. According to the legend, its wrath could be materialized into a terrible earthquake. However, Ravenswood would not believe such stories. Time went by and the gold in Big Thunder Mountain ran out, making miners dig deeper into the Mountain.

Years later, Melanie grew from a young girl into a beautiful young woman. Four suitors were seeking a hands of Melanie but they ended dead and killed by her father, Henry Ravenswood. Melanie became engaged to a train engineer named Jake Evans who planned to take her far away from Thunder Mesa, much to the dismay of Henry.

Henry did everything he could to stop the wedding, but his useless attempts were put to a stop when a terrible earthquake killed him and his wife in 1860. It seemed that the Thunder Bird had been awakened and the family was never heard from again. After several years, the story of what really happened came out from underneath the rubble:

On Melanie's wedding day, a mysterious Phantom unknown to anyone appeared at the manor. While Melanie was preparing in her room, the Phantom lured her suitor up to the attic, where he hanged him by the neck from the rafters.

In the ballroom, the bride sat alone. Hours went by with no sign of the groom. Guests slowly filed away, leaving Melanie alone in the house with the staff of maids and butlers. "Someday", she told herself, "he will come". And so, having never taken off her wedding dress or dropped her bouquet, in preparation for her loved one's return, she wandered the house aimlessly, singing melancholy songs of lost love.

The Phantom was still in the house, laughing at her human devotion to her intended husband. One by one, he invited his dead, demonic friends from the afterlife to fill the house in an eternal party. The shape of the house was slowly transformed by the forces of evil.

To this day, it is believed that the manor is still haunted by the evil spirits and that Melanie remains vigilant in the search for her lost love.

Before guests entered the manor, Melanie could be seen looking down at the guests from inside of a window. When they entered, she could first be seen in the foyer of the attraction. Her portrait was in the mirror hanging above the entrance to the stretching room, and would fade in and fade out, as the Phantom spoke to the guests.

Four portraits of Melanie were in the stretching room. Like at The Haunted Mansion, the portraits changed from innocuous and innocent to dark and sinister. They depicted the following:

A portrait of Melanie could be seen at the end of the portrait gallery, dressed in her wedding gown and holding a bouquet of roses.

After guests boarded their doom buggies, Melanie greeted them, holding a bouquet and a candlestick. She bowed her head, as they passed by. In later years, her veil was pulled over her face, most likely to cover for the animatronic's face not working properly. In the endless hallway, she held onto a candelabra, disappearing and reappearing as guests rode by. She stood on the balcony of the ballroom, looking down at her wedding guests and up at the Phantom, who stood a window laughing at her. Though the wedding guests disappeared and reappeared, she remained.

She sat at her dresser in her boudoir, now an old woman, crying and rubbing her eyes with a tissue. Tear-stained letters between her, her fiancee, a friend, and her father could be seen sitting on a table, and the wedding portrait from the queue was here, as well. When guests left Phantom Canyon, Melanie, now a skeleton dressed in rags, pointed to the way out and guiding the guests to safety.

Once they exited their doom buggies, a smaller version of Melanie stood in a wine cellar, holding onto her bouquet, urging them to hurry back.

Melanie's presence in the attraction after the 2019 refurbishment differed from the original attraction.

She is first seen in the foyer, in a portrait with her father, Henry Ravenswood. She is dressed in her wedding gown, while he clutches onto her shoulders. As the Phantom speaks, the portrait fades into one of Melanie and her father during the manor's prime, and she is now dressed in a blue gown with a happier expression.

Melanie still appears in the stretching room, but with new portraits of her four suitors. When the doors close and the music begins, Melanie disappears from the portrait, and their grim demises are revealed.

Her wedding portrait at the end of the portrait gallery remained, but enhanced with a black light silhouette of her father behind her.

Once guests board their doom buggies, she is first seen in the endless hallway, alongside the Phantom. He looms over her, as she holds onto a candlestick. They disappear and reappear every few seconds. In the ballroom, she stands on the balcony, overlooking the party, while the Phantom stood behind her. She still sits in her boudoir, as a young woman, crying while the Phantom stares at her through the mirror.

At the end of the attraction, in the hall of mirrors, she sits in the doom buggies with the guests, much like the Hitchhiking Ghosts, deliriously asking them to marry her. Her voice can still be heard as they exit, but the small Melanie is gone.

Melanie has made sporadic appearances in the Disney Parks, usually during live shows, parades, and special events at Disneyland Paris.

Melanie appeared at the end of the Frontierland segment of C'est Magique, a revue-style show at the Fantasy Festival Stage, in the early years of the park. Her dress was slimmer with a large slit on the side so that she could move more easily. She moved across the stage to the center, where she was carried upstage by the Phantom. She moved to join one of the groups of dancers, until the song ended, where she crossed the stage and exited on the opposite side.

Melanie joined the Mickey's Halloween Celebration parade in 2018, in a new gown with short sleeves, long gloves, and blue accents on her skirt. She appeared on the Illusion Manor float, alongside the Phantom, occasionally going into the Phantom to trade places with Mickey Mouse. During the show stop, she danced on one of the stages in the hub with the Phantom and four zombie dancers. She appeared in the Halloween parade at Disneyland Paris in 2018 and 2019, walking down the parade route with the Phantom and a group of dancers.

When Phantom Manor reopened on May 3, 2019, Melanie could be seen walking around the manor's grounds. She didn't speak to guests, and only stared at them curiously, before rushing away. On the manor's porch, the Phantom shielded her from the rest of the guests, acting possessive towards her.

Melanie made her debut as a meet and greet character at the "100 Character Night" event on September 13, 2019. She stood in front of the sarcophagus in the Boot Hill, alongside the Phantom. Her costume featured a beating red heart, as an homage to the bride from the Haunted Mansion.

Melanie as a maid and a bride 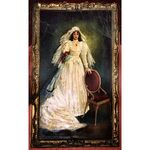 Painting of Melanie in her wedding gown

Melanie as a maid

Audio-Animatronic of Melanie in her wedding gown

Melanie and her father by Greg Pro, from [1]