To find her long lost love

Dies, but lives on as a ghost, continuing to wait for her groom to return

"Someday, he will come."
Melanie Ravenswood is a prominent character featured in the Disneyland Paris attraction, Phantom Manor. She is a ghost of a bride, whose groom never materialized on their wedding day.

However, Big Thunder Mountain was rumored by Natives to be home to the Thunder Bird--a powerful spirit possessing a treasure. According to the legend, its wrath could be materialized into a terrible earthquake. However, Ravenswood would not believe such stories. Time went by and the gold in Big Thunder Mountain ran out, making miners dig deeper into the Mountain.

Years later, Melanie grew from a young girl into a beautiful young woman. Four suitors were seeking a hands of Melanie but they ended dead and killed by her father, Henry Ravenswood. Until Melanie has engaged to a train engineer who planned to take her far away from Thunder Mesa, much to the dismay of Henry.

Henry did everything he could to stop the wedding, but his useless attempts were put to a stop when a terrible earthquake killed him and his wife in 1860. It seemed that the Thunder Bird had been awakened and the family was never heard from again. After several years, the story of what really happened came out from underneath the rubble:

On Melanie's wedding day, a mysterious Phantom unknown to anyone appeared at the manor. While Melanie was preparing in her room, the Phantom lured her suitor up to the attic, where he hanged him by the neck from the rafters.

In the ballroom, the bride sat alone. Hours went by with no sign of the groom. Guests slowly filed away, leaving Melanie alone in the house with the staff of maids and butlers. "Some day", she told herself, "he will come". And so, having never taken off her wedding dress or dropped her bouquet, in preparation for her loved one's return, she wandered the house aimlessly, singing melancholy songs of lost love.

The Phantom was still in the house, laughing at her human devotion to her intended husband. One by one, he invited his dead, demonic friends from the afterlife to fill the house in an eternal party. The shape of the house was slowly transformed by the forces of evil.

To this day, it is believed that the manor is still haunted by the evil spirits and that Melanie remains vigilant in the search for her lost love.

Melanie as a maid and a bride 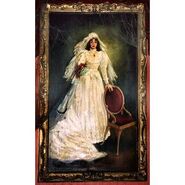 Painting of Melanie in her wedding gown

Melanie as a maid

Audio-Animatronic of Melanie in her wedding gown

Retrieved from "https://disney.fandom.com/wiki/Melanie_Ravenswood?oldid=3827070"
Community content is available under CC-BY-SA unless otherwise noted.