Vivian and Georgette
Melissa Ann McCarthy is an American film and television actress, voice actress, comedian, writer, and producer who is best known for her roles as Sookie St. James on the comedy-drama series Gilmore Girls from 2000 to 2007, Dena on the ABC sitcom Samantha Who? from 2007 to 2009, and starred as Molly Flynn-Biggs on the CBS sitcom Mike & Molly from 2010-2016. McCarthy achieved major success and fame for her breakthrough role as Megan in the 2011 comedy film Bridesmaids.

For Disney, she played the Sky King waitress in the 2000 Disney film The Kid, and voiced Amy Hall on the Disney Channel animated series, Kim Possible.

McCarthy will be playing Ursula in the live-action film, The Little Mermaid and an actress playing Hela in Thor: Love and Thunder. 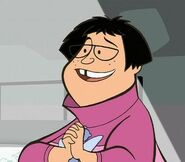 Melissa McCarthy and Billy Gardell speak at the Mike and Molly panel at the 2012 Winter TCA Tour.

Melissa McCarthy at her Hollywood Walk of Fame ceremony in May 2015.

Melissa McCarthy attending the 2019 MTV Movie & TV Awards.
Add a photo to this gallery
Retrieved from "https://disney.fandom.com/wiki/Melissa_McCarthy?oldid=4471799"
Community content is available under CC-BY-SA unless otherwise noted.