Is accepted by the Witch who agrees to give Merida a spell.

Merida's Pendant was once Elinor's before she gave it to her daughter, after fitting her into a tight blue dress and before meeting the Lords and their sons. It was later used to pay for the spell that turned the queen into a bear.

A pendant depicting three silver bears with small, green emeralds for eyes. It has a silver and green background and the design on it is the kingdom crest of DunBroch.

Elinor wears the pendant on Merida's sixth birthday, where Merida gets her first bow and Fergus got his leg bitten off by Mor'du, while defending his wife and child. Years later, Elinor gives it to Merida, before meeting Lords Macguffin, Macintosh, Dingwall, and their first-born sons. A meeting Merida didn't want to be a part of; as the lords' sons fight for her hand in marriage.

After a fight between the princess and the queen, Merida ran off in tears on the back of her Scottish Clydesdale horse, Angus, and somehow ended up in the Ring of Stones. Will O' the Wisps later appear as they lead her to a cottage, trusting in the legend of the wisps "leading people to their fates" Merida goes inside, to see why they brought her there. Inside, she meets an old woman and her wooden bear carvings. After catching the woman's broom moving on its own, her crow talking and singing, and using magic with the click of her fingers, she comes to the conclusion that the "wood carver" is actually a witch; one that can use her magic to change her fate!

The witch tries to convince the princess that she is just an old wood carver, but when she doesn't listen, she tries to chase her out with her knifes and sharp carving tools, until Merida says that she'll buy every single carving she has. The witch falls in love with her necklace's beauty, as Merida showed and told her that she'll use it as payment; for "every carving and one spell" to change her fate. The deal was made the moment the witch took the necklace out of Merida's hands.

The pedant is the second piece of royal jewellery that the witch got as payment for a fate-changing spell that turns people into bears; the first was a bronze ring with a twin cross axe crest that was given to her by a prince, who asked for the strength of ten men. Mor'du when he was human, while the crest on the ring is the mark of the kingdom that he had lead into ruin.

Merida Wearing it in the Throne Room

Giving it to the Witch as payment 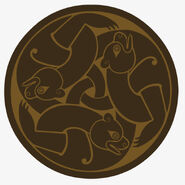 As the "Emblem of Bravery" badges in Disney Heroes: Battle Mode