Will Vandom
Irma Lair
Taranee Cook
Cornelia Hale
Hay Lin
Meridian, also known as Metamoor or Metaworld, is a fictional planet in the comic book series W.I.T.C.H. and in the animated series of the same name.

Meridian is red-orange planet under the guidance of Kandrakar. It is ruled by a single Queen, who has powerful magical powers and is the center of mystical energy in the planet (the Heart of Meridian). The Queen is currently Elyon Brown.

This planet has streets full of merchants and extraordinary underground caves. People here live mainly from agriculture, although some have other jobs. At one point there is a great Harvest festival, where food is eaten and people dance and sing. The remaining food is equally divided between Meridian's inhabitants, as suggested by Elyon.

The inhabitants of Metamoor/Meridian are separated into two major groups:

There also exist halfbreeds between the two, independent murmurers created by Phobos and beasts, creatures who can change between an apparently human form and a beast form. Other animals and creatures that do not fit in either group have been showed, but they were not specified.

Meridian was always ruled by a Queen, who was also the center of mystical force in the planet. It was once a happy place to live. That is until Queen Weira and her husband Zanden mysteriously disappeared and their son, Prince Phobos seized the throne. He drained Meridian dry of its magic, stealing its life and light. Meridian was barred from accessing the rest of the universe by the Oracle and Kandrakar, because the congregation feared Phobos might want to repeat his magic-draining process with other worlds. Phobos then decided to steal his sister Elyon's superior magical powers then his own to get past the Veil. Thankfully, a nanny named Galgheita took the baby Princess Elyon from the palace and took her to Earth, where she was raised as a normal girl. Twelve years later, Phobos searched for his sister on Earth and found her, despite the Guardians of Kandrakar's interference. Phobos almost managed to obtain Elyon's powers, but she and the Guardians defeated him. Elyon was then revealed to be the Light of Meridian the destined and powerful matriarchal savior. When she finally obtained the Crown of Light, she came to her full powers and brought life and light back to Meridian.

A little while later, Elyon was forced from the throne by Endarno, the new Oracle, who was really Phobos in diguise. Although the Guardians manage to keep the Crown of Light from him, Elyon is imprisoned and her powers are slowly drained from her. However, she later defeats the Oracle (Endarno) with the help of the Guardians, and goes back to being the Queen of Meridian.

Meridian is a kingdom far away under the watching eye of the Oracle. It is ruled by a single Queen, who has powerful magical powers and is the center of mystical energy in the planet (The Heart of Meridian). The Queen is currently Elyon Brown. This planet has streets full of merchants and extraordinary underground caves. People here live mainly from agriculture, although some have other jobs.

Meridian has many different creatures like Larveks, Mudslugs, Mogriffs, Sandpit, Hermeneutas, Passlings, Kaithim etc. Some creatures can change between an apparently human form and a beast form - Cedric can do this when he wants to be in his Human Form or Beast Form.

Meridian is the most frequent and traveled to place for the Guardians in Season 1. Throughout Season 1, Meridian is the only known Planet to the Guardians as the Veil was raised and not much was known about the other worlds like Zamballa, Kandrakar, and Aridia. Much of the action happened on Meridian in Season 1 and the Guardians frequently traveled there to help and stop Phobos’ schemes. The important place in Meridian is in a Large Village next to the Castle, which is on top of high land extending upwards. This is where Phobos lives and is the main center of activity since the Guardians always attack.

13 Years ago, Phobos came to power and was the ruler over Meridian, however he was just after power and transformed Meridian into a dark, gloomy world. The village next to the Palace was reduced and the Palace itself changed from a yellow, blue, red colour to a black grey Castle. Spikes also grew round Meridian and also huge ones on the side of the Castle.

The Council of Kandrakar raised the Veil to stop his evil spreading to other worlds. A Rebellion soon started and was led by Caleb and made their base in the Infinite City (Phobos doesn’t know of it yet). 13 Years passed and new Guardians were given the job to protect the Veil as portals where evil passed from Meridian to Earth started popping up, the Guardians had to seal them.

The Guardians did so, but Phobos found out who his long lost sister was: Elyon Brown. With the help of Cedric, he managed to get Elyon back to Meridian and in the last episode of Season 1 "The Final Battle", Phobos was on the verge of absorbing her powers, until the whole Rebellion got into the Castle and the Guardians assisting Elyon in her escape. The Guardians and Elyon then imprisoned Phobos and the rest of the Lurdens in the Infinite City.

Meridian was then transformed back into the way it was 13 years ago, the Palace changed and the sky turned blue and the vines disappeared and flowers and ponds replaced them. Elyon was made Queen of Meridian and the Villagers began building their village back again linking bridges to the Palace and creating different kind of buildings.

In Season 2 "B is for Betrayal", the Veil was lifted as Phobos was defeated and the Guardians still went back to Meridian because Nerissa showed and started her planning, beginning with the Knights of Vengeance, but were soon imprisoned, when they released Phobos from his cell.

Nerissa's true intentions came about in "J is for Jewel", when Nerissa managed to steal Elyon’s power (Heart of Meridian) and imprisoned Elyon within a tear-drop jewel. After this Meridian is left alone for a while until "V is for Victory" when the Guardians situation became desperate, so they released Phobos in order to get the Seal of Nerissa from Nerissa herself. Phobos did so and re-took Meridian again transforming back the Palace into the gloomy old Castle and the sky changed and the village and all of Meridian with it. However, his victory didn’t last when Cedric turned against him and ate and swallowed him. Cedric grew to the size of Godzilla and went on to take Earth when Meridian and Kandrakar were conquered. The Guardians defeated Cedric and Phobos along with the Lurdens, Miranda, Frost and Cedric were once again imprisoned.

Elyon turned the Castle back into the Palace and the whole of Meridian back to peaceful life. Along with Raythor, Sandpit and Gargoyle at her side protecting the Palace from future attack and goes back to being Queen of Meridian.

The Infinite City made its debut in Season 1 "A Service to the Community". The Infinite City is below Meridian and the Guardians didn’t know at first, but Caleb tells them and shows them. The Mage guards the City. The Infinite City is underground and has lots of pillars running along. The City itself is a lime green city, but in daytime the city appeared to be red, orange and cream.

Nobody knows who created or built the Infinite City and when, it has a mysterious past as the City is infinite and keeps going on and on in all directions. The Infinite City is kept secret from Phobos because the Rebellion used it as their base of operations. There is only one way of getting down into the City and its by using a secret passage in a disused area of land and through a little cupboard. It is then led down some stairs and into the City itself. Just a few yards is another passage, and under there is like a basement but inside is a waterfall and the Mage stays and guards the city.

Near the end of Season 1, Cedric had discovered the Infinite City due to a Rebel who wasn’t being careful. Vathek watched over the stairway and sent a pile of boulders on the stair way to block the access of Cedric getting through. Eventually however the Lurdens dug through and wrecked part of the City were the passage down to were the waterfall was. Cedric demanded that five Lurdens go down there and bring the Mage up, but when they entered the Passage and got halfway down the steps, all that was heard was five screams ringing through the City. He then sent the General down and the same thing happened to him.

In the beginning of Season 2, Phobos is imprisoned along with all the Lurdens, Cedric and Miranda behind the waterfall in the Infinite City. Vathek becomes the prison keeper of Phobos' cell in the City. The Mage was soon revealed to be Nerissa and it was her who guarded the City all along. However, Vathek did his best but near the end of Season 2, he was defeated when Phobos freed all the Lurdens and the Knights of Vengeance. But he was once again defeated and locked again the Infinite City.

The capitol city of Meridian in Metamoor 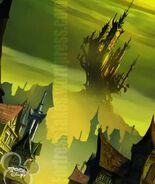 The true and beautiful form of the Meridan Plains after Elyon's battle with her evil brother Phobos
Community content is available under CC-BY-SA unless otherwise noted.
Advertisement