Images of Merlock the Magician from DuckTales the Movie: Treasure of the Lost Lamp.

"Let me light your path."

"You shall go in the rear entrance while I go in the front."

"If Scrooge gets past you, it will be your hide."

Merlock about to whip Scrooge away.

"Silence! I wish you would cast him out of my house."

Merlock plummets to the ground.
Add a photo to this gallery

Merlock's showdown in the PC, N64 and Dreamcast versions

Merlock's showdown in the PS1 version

Merlock's showdown in the PS2 and Gamecube versions

Merlock in his fight with Donald over Daisy 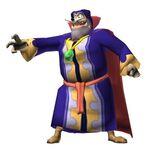 Merlock's defeat in the PS1 version

Merlock is among the crowd of bad guys on this cover for DuckTales #1, despite not appearing in the actual issue.

Add a photo to this gallery
Retrieved from "https://disney.fandom.com/wiki/Merlock_the_Magician/Gallery?oldid=4022762"
Community content is available under CC-BY-SA unless otherwise noted.