A human explorer known in the episode as the author of The Little Mermaid story, Hans Christian Andersen, boards a primitive submarine to explore the undersea realm, and crosses paths with Ariel when his submarine is damaged and starts to leak. 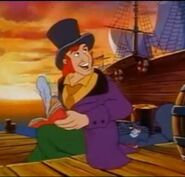