Hypnotism powerful enough to put one's mind into a false reality channeled through her eyes
Mezmerella is a villain from The Incredibles comic book series that were published by Boom! Studios. As her name implies, she is a master of hypnosis.

Mezmerella was created by comic writer Landry Walker and designed by Eric Jones and planned for the Batman: The Brave and the Bold comic adaptation before being repurposed for Incredibles. Originally named Hypnotica, her name had to be changed as it was already in use by a different character. Walker also wrote a tragic backstory to the character that has yet to be fully elaborated on in the comics and with the comic being in limbo, it remains to be seen if her history will be explored.

Mezmerella first appears in issue 4. Fighting the family on a rooftop on a skyscraper in Metroville, Mezmerella has brought Violet under her spell to activate a powerful doomsday device called a Psy-Glane Inverter, which would send out a psychic shockwave that would kill numerous people down below. Dash acts quickly to destroy the machine and quickly catches Violet when Mezmerella pushes her off the building before Dash quickly beats her down.

However, when Dash thought he defeated Mezmerella was actually a hypnotic illusion and Dash experiences such sensations as his parents removing his powers for his recklessness, the teachers in his school being disguised aliens and a battle between the aliens and Underminer where the illusion starts to crack and Dash sees that Violet is still falling. As the dream world Mezmerella created starts to break down and get crazier, Dash eventually finds his way out, which causes Mezmerella's goggles to shatter. Dash first rushes to catch Violet, and while Mezmerella gloats thinking she took care of both children, she is quickly rushed by Dash, growing more frustrated by his hit-and-run attacks before finally being knocked out ending her plan.

In the Metroville prison, Mezmerella receives an invitation to join the Unforgivables, a new villain organization that's been building up. Her first act after joining up is to take over the prison in order to use it as a base. A power amplifier is set up to increase the strength of Mezmerella's powers and create a hypnotic broadcast to bring Metroville under control in a plot to discredit the supers. But the machine's incredible power comes at the cost of putting Mezmerella into a state of unconsciousness. However, covers for the delayed "Unforgivables" arc show Mezmerella actively fighting the family, so she presumably recovers.

Mezmerella is featured on a villain "target practice" float in the Pixar Pals! The Incredibles Heroes in Training show/parade at Disney California Adventure. She is the only character from the comics to be featured in a Disney theme park.

Mezmerella in a prison uniform 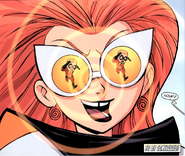