Jesse Eisenberg (2013-2015)
Mia Wasikowska is an Australian actress, voice actress, and director. She is well known for her debut role as Lily Watson on the Seven Network series All Saints and as Sophie on the HBO series In Treatment.

Alice Kingsleigh
(Alice in Wonderland, video game, Alice Through the Looking Glass, and Disney Infinity 3.0)
Add a photo to this gallery

Mia Wasikowska at premiere of Alice in Wonderland in February 2010. 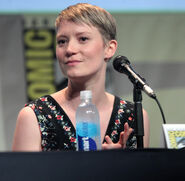 Mia Wasikowska at premiere of Alice through the Looking Glass in May 2016.

Mia Wasikowska attending the 2019 Sundance Film Fest.
Add a photo to this gallery

Retrieved from "https://disney.fandom.com/wiki/Mia_Wasikowska?oldid=4280994"
Community content is available under CC-BY-SA unless otherwise noted.