“Everybody will tell you to let it go and move on, but don't. Instead, let it fester and boil inside of you; take these feelings and lock them away; let it fuel your action. Let hate be your ally and you will be capable of wonderfully horrid things. Heed my words, Goob: DON'T let it go.”
―Bowler Hat Guy

Michael "Goob" Yagoobian, A.K.A. the Bowler Hat Guy, is the central antagonist of Disney's 2007 animated feature film Meet the Robinsons.

As a 12-year-old boy, Michael is more interested in baseball than his roommate's inventing hobby. He is mature for his age as he is willing to let go of his problem, albeit rather absent-minded as he can talk even without anyone else paying attention and not noticing this. He can also be immature sometimes since he often snarkily remarks on Lewis’ hobbies being stupid.

However, in one of Lewis' timelines, after he missed the winning catch, his fury became uncontrollable as he was in a bad mood. He was unwilling to do anything else with his life or move forward from his mistakes, and became an aimless, overweight adult unwilling to take care of himself. Once the orphanage shut down, as time progressed (and as he grew up), his resentment of Lewis grew, especially when, after years of hearing Lewis’ accomplishments in the future, he finally realized why he fell asleep during the last inning and pinned this on Lewis.

As a result of shutting himself from the world for three decades, Goob never properly matured as an adult as his anger caused a stunted mental development. His childlike attitude suggests that he dropped education after finishing middle school, given that he lacked the knowledge and common sense for many things in life as a side-effect of his self-destructive obsession of destroying Lewis and was shown to be both a bad speller and rather illiterate. He has displayed extremely childish mannerisms, such as running on the table in the meeting room of Inventco. during his failed presentation of Lewis' Memory Scanner. He also has a habit of committing childish mischief as evil deeds in his terms which greatly crippled his attempts for revenge before meeting DOR-15 and even during his partnership with her. It took many of his misdeeds to fully wake him back to his senses when Doris takes over the future and betrayed him to his death (which was erased by Lewis later).

He's also very short-sighted and barely thinks things through. As when he's given a Mini-Doris to control, his course of action doesn't seem to go further than taking control of someone and making them charge at the humans while rushing capture against Lewis. This was commented on by the minions he controlled, as they voiced how they didn’t think his plans were thought through very well. He also fails to realize how his life would continue if he would succeed in his revenge.

Ultimately, Goob represents a side of Lewis that refuses to let go of past failures in life, as evident in his behavior and outdated outfit. He serves as a parallel to Lewis, as the genius boy would not have given up his intention to find his biological mother had Wilbur Robinson not intervened.

In the end, the original Future Goob finally realized Doris’ deception when Lewis showed him the future that would’ve happened had he and Doris succeeded, much to his sadness due to genuinely considering Doris his friend. He could only walk off in shame and disappointment while Lewis attempted to have him adopted by the Robinsons, accepting that his revenge was ill-conceived and feeling ashamed that he let his negative emotions stop him from moving forward with his life. However, when Lewis changed the past by waking Goob up before his final inning and Goob succeeded in catching the ball, this prevented his original future from happening and resulted in Goob being a happier person, no longer an angered little boy, and is eventually adopted, which procures him a better life than the one he originally grew up with. He is now on amicable terms with Lewis, whom he now has no reason to resent.

Goob is a pale child with black hair, although he has black eyes due to sleep deprivation. He wore a green baseball uniform with white pants, a jacket, and a cap. As an adult, he is a tall, skinny man often seen wearing a bowler hat and suit. He is commonly dressed in black as an adult, but underneath the suit, he still wears the same baseball uniform from when he was a child. Michael is said to be the resemblance of the farmer's son, "Jesse Lopez Aunario".

Michael Yagoobian is Lewis's roommate and is kept up all night by Lewis working on his memory scanner. As a member of the local Little League team, the Dinos, Goob never really takes an interest in his roommate's inventing.

The last game of the season occurs on the same day as the Science Fair. During the 9th inning, he falls asleep and misses the winning catch. The players beat him up and (after taking advice from a man who was later revealed to be his future self) he never lets it go. No one wants to adopt him since he is so angry. He also believes that everyone hates him, despite a few that are willing to become a friend, he is too angry to notice. Eventually, the orphanage is closed down and he is left behind.

He spends the next 30 years in the orphanage, never changing out of his baseball uniform and listening over the radio tormenting himself listening to Lewis's successes. He finally decides that his current situation is Lewis' fault, reasoning that if Lewis did not work on his project keeping him up all night, he would've caught the ball and could've been adopted. He threw eggs and toilet-papers Robinson Industries as a pathetic attempt at revenge. Then, he meets Doris, who tells her story about being a helping hat, a slave to humans. She says that she is capable of more things, but Cornelius did not see her as anything else she was capable of doing. Cornelius thought she was shut down, but she escaped the lab and swore revenge, plotting to steal the Robinsons' time machine. Realizing his simple plan was inferior to what Doris had in mind, Goob added in the sabotage of the Science Fair to the hat's scheme. The two joined forces, and Goob took on the identity of Bowler Hat Guy.

He steals the time machine from the Robinsons rather easily when Wilbur fails to listen to his mother and forgets to lock the garage door. He ruins the science fair where Lewis is presenting his memory scanner, then steals the device and takes it to Inventco. Since he doesn't know anything about the scanner, he is thrown out, and at Doris' suggestion, they start to track Lewis for help. Checking at the orphanage, Goob runs into his past self, who had just returned after being beaten up by his baseball team. After being reminded that Lewis likes to hang out on the roof, future Goob decides to go up there, but not before telling his past self to nurture his hatred and resentment for Lewis. Upon discovering that Wilbur had followed them to the past, and was now gone, they return to the future and land invisible in the Robinsons' lawn. When Doris leaves to get Lewis out of the Robinson house, she gives him control of a mini-Doris so that he can accompany her without leaving the time machine. After spying Lewis, Doris flies off on her own, while Goob ponders how to get him out of the house. After finding a bar of frogs, he has an idea of taking control of Frankie and using him to intercept Lewis and bring him to Goob. This fails as Frankie is too small to grab Lewis. After dismissing Frankie, a garden structure gives him the idea to go back in time and steal a T-Rex named "Tiny". He then sends him controlled by Mini-Doris after Lewis. With the help of the Robinsons, Lewis, and Wilbur defeat Tiny and Mini-Doris is taken away by the frogs to her presumed destruction, while Doris chastises Goob for his plan. However, they seize their chance when Lewis is walking away from the Robinson family after being seemingly betrayed, Goob promising to use the time machine to take him back to see his mother if he will repair the memory scanner. Wilbur's arrival makes Lewis angry enough to agree, and Goob flies them in the time machine to his old orphanage home. After Lewis fixes the memory scanner, Doris ties him up and takes him prisoner, and then Goob tells his story. Carl and Wilbur save Lewis, but before they can reach the house, Doris impales Carl and steals back the memory scanner, and Goob pauses just long enough to taunt them before going back to the past.

Goob successfully passes off the memory scanner as his own and then presents the idea of helping hats to Inventco. Sometime shortly afterward, the helping hats begin terrorizing the people, and a horrified Goob asks Doris about it and that he only wanted to ruin Lewis' future instead of this. But Doris, having no more use for Goob, sics several hats on him and presumably kills him. This future is edited, however, after Lewis uses the time machine to go back to before it was set in motion.

At the point in time immediately after Goob signs the contract and makes the invention his own, Lewis appears and tells him that Doris is using him and will kill him after getting what she wants. Goob sees Doris being destroyed after Lewis promises he will never invent her. Lewis then shows Goob the industrial, smog-filled future that Doris would have created, which fades after a few seconds thanks to Lewis's intervention in the past, restoring the original, peaceful future. As Wilbur is restored into existence, he attacks Goob on sight, until Lewis pulls him and tells his future son of his association with Goob. Then Goob leaves, wondering what to do next despite Lewis getting Wilbur to offer to have the Robinsons adopt him. He leaves his binder behind with his checklist and one unchecked box that has a question mark next to it.

Upon returning to the past, Lewis, instead of going straight to the Science Fair, heads to the ball field where young Goob is sleeping. Lewis yells at him, waking him up and Goob catches the ball he missed before, winning the game and negating the events that led to his transformation into the Bowler Hat Guy. Goob is shown as a much happier person afterward, no longer having a reason to be so furious. He is seen carrying around his trophy and getting adopted by the Hendersons, a couple that had previously interviewed Lewis and having an amicable goodbye with Lewis when he leaves the orphanage.

Upon the release of the film, the Bowler Hat Guy made meet-and-greet appearances throughout some of the Disney theme parks. He usually appeared alongside Lewis and Wilbur.

Despite his reformation at the end of Meet the Robinsons, Bowler Hat Guy also made an appearance with classic Disney Villains for the "Unleash the Villains" stage event at Disney's Hollywood Studios in 2013 and has appeared at various Halloween and Villain themed events ever since.

Goob about to be beaten up by his teammates for missing a catch.

Having a drink at Playtime Planet.

"I don't understand! I just wanted to ruin his future, not this."

The hats overtake him.

Goob guilty over his actions

His team, the Dinos 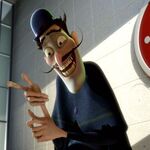 Bowler Hat Guy at one of the Disney Parks

“Don’t repeat everything I say.”